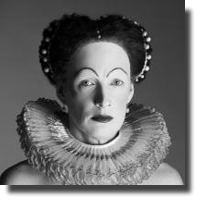 I can’t say I’ve ever had a theatre production bring me to tears - that is, until I saw Timothy Findley’s magnificently acted production of Elizabeth Rex in its tented venue at Bard on the Beach. The evening began as a powerful and inspiring combination of brilliant writing, superb direction, subtly effective light, sound and set, beautiful period costuming, and acting that immediately charmed and engaged the audience. The action on the stage was active, realistic, and totally in its world. It is always a pleasure to not see “acting”, but rather, real mutual engagement that we can peer in on.

By the end of the performance, the audience was no longer watching. We were, in spirit, on the stage, empathizing, encouraging, pushing and prodding, and collapsing in the agony of the main character, Queen Elizabeth I, as she has layers of pretense and bravado peeled away by Ned in their verbal duel. The depth and range of Findley’s pondering are the parry and thrust of the dialogues and conversations that build up and tear down the characters as they await the execution, at her own command, of Elizabeth’s lover, Essex.

What can be said of the actors? The cast is a fine combination of artists who have been nominated for, and won, scholarships, prizes and Jessie Awards. Little wonder that they were able to create such a magnificent production. The acting troupe, who made up the majority of the cast, were wonderfully contentious and close. David Marr, as William Shakespeare, was a subtle leader of his troupe, deftly humorous and inspiring, as he steered the group through this treacherous night with the Queen.

Chris Cochrane was a fine lout, never short of offensive opinions, yet yearning for acceptance that would never quite come. Bernard Cuffling enchanted everyone with his whimsy that sometimes slipped perilously close to senility. Dustin Freeland and Anton Lipovetsky were wonderful players of women, and convincing in other moments in the limelight. Lois Anderson delighted the audience as the energetic and optimisticTardy the Seamstress. Luc Roderique, as Matt, Sereana Malani as Lady Stanley, and Susinn McFarlen as Countess Henslowe were effective in rounding out the action and the other characters.

The main action centers on the debate between the actor, Ned, and Queen Elizabeth. Haig Sutherland as Ned, and Colleen Wheeler as Elizabeth work their way to a fine tension and a crescendo of emotion as the night grinds on toward the execution of Essex. The performances of these two are more than spellbinding. The finesse with which they tighten the suspense of the night is masterful, bordering on genius. And the bells sound off the hours throughout their contest, ominously heightening the tension. We come to dread those bells. The final moments of the long wait, the culmination of their mutual savagery, are charged with remorse, confession, and tears - theirs and, I’m not ashamed to say, mine, Bravo!