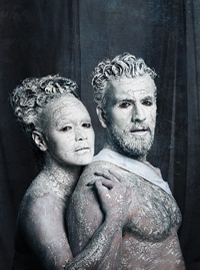 Bard on the Beach
Pericles by William Shakespeare

Taking huge liberties with the text, (not all of it Shakespeares to be sure. The first 2 acts are probably by his neighbour, George Wilkins, sometime pamphleteer, dramatist, pimp and petty criminal) director Lois Anderson opens Pericles near the end of Act IV, with a girl in a brothel, the bullying brothel-keepers and Cerimon, a mysterious patron and healer. Off-shore lies a ship with a dying king. It is the beginning of a wonder-tale, told by Cerimon, who in Andersons hands is a cross between Shakespeares original narrator and Prospero.

Cerimon tells Marina the story of Pericles using what props come to hand, a tower of baskets and bowls for the city of Antioch, rough figurines for a king and his daughter, a handkerchief veil. Then puppets, magically galloping in a tournament down a length of cloth. More cloth morphs into a prancing horse for a real actor to ride. It is gripping.

More actors soon take their places on stage, playing multiple roles with the smallest of changes in costume which is vaguely middle eastern, sand-coloured, like sepia drawings for The Arabian Nights. Muddy-coloured lengths of cloth mutate from still and formal table-cloths to rocking ships to an over-whelming foam-flecked wave. John Webbers subtle and atmospheric lighting heightened each circumstance of plot and place and Bill Dows music sets a sound world at once exotic and entrancing. Andersons way of telling a tale is economical, convincing, highly imaginative and strangely beautiful.

The plot whizzes along. Pericles (Kamyar Pazandeh) enters a competition to win the hand of a princess, but the singularly unpleasant game (spoiler alert: involves incest) has been rigged. All losers lose their lives, any winner will be murdered. Pericles flees for his life and embarks on a sea voyage around the Mediterranean. He arrives in Tharsus where he establishes a close friendship with its rulers by providing famine relief. He sets off again, but is engulfed off the coast of Pentapolis (northern Libya) and is rescued by fishermen. Learning of another competition for a princesss hand, he enters a tournament and wins again, but this time luckily. Thaisa is a good and worthy princess and, as portrayed by Sereana Malani, delightfully earthy and full of fun. Together they set off for home, but again a storm strikes. Thaisa dies in childbirth and, with a horrifying and heart-breaking shove, Pericles pushes her overboard and sets sail back to Tharsus where he leaves his baby to be brought up by his good friends. Each episode grows more compelling as we, and Marina, realise that it is her story that is being told.

Dazzling colours infuse the second half as the story becomes Marinas present life. Luisa Jojics Marina is utterly captivating from first setting foot on stage. Passionate and direct, she grows in understanding as the story unfolds. Kamyar Pazandeh (Pericles) turned in a solid performance, likeable and well-sustained. Ian Butcher was a revoltingly sordid Boult, Kayla Deorksen a raucous Bawd. Luc Roderique played Helicanus, usually an important role of trusted and uncorruptible counsellor, but this time sacrificed to other themes of the play. Kayvon Kelly doubled nicely as wicked murderer and worthy Governor. Jeff Gladstone, mostly seen in smaller roles, played Dionyza, first lady of Tharsus. Dionyza is largely a stock character, the over-bearing wife and wicked step-mother, but for a few chilling seconds Gladstone slipped off the mask and Dionyzas passion to remedy her own daughters ill-treatment at any cost was laid bare.

Wise, kind and patient, David Warburton's Cerimon, narrator and Master of Ceremonies, was magic. Literally turning water into what looked like wine, shooting sparks from his fingers and pulling puppets from the air were nothing to his metaphorical conjuring of a world of the imagination.