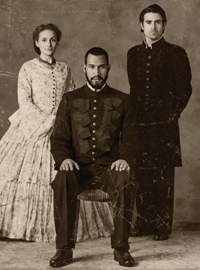 Bard on the Beach
Othello by William Shakespeare

Iago is arguably the most treacherous of the Bard’s colourful villains. I’ve always considered Iago, not Othello, as the de facto central character of William Shakespeare’s classic cautionary tale. A wilful combination of agent provocateur and snake-oil salesman, Iago has long bewildered Bard disciples. How could a man, bound by loyalty, betray his master who places so much trust and belief in him? Does a black man wed to a beautiful white woman offend some racist sensibility? When he sows the seeds of suspicion in Othello’s mind, the seeds fall on fertile ground – just as he knew they would.

Director Bob Frazer moves the setting from Cyprus in 1600 to Charleston, South Carolina in 1864; at the height of the American Civil War between the Confederate and Union armies. Taking the most historic event in America's consciousness and placing it as a backdrop to Shakespeare’s harrowing tragedy, actually works very well. Frazer recreates enough of the play’s central components of malice and mistrust to guide the drama to its predictable destructive conclusion.

Frazer gets help (and generously gave credit in a post performance speech) from Kayvon Kelly and
Luc Roderique who envisioned the project in the first place. The pair also take on the iconic roles of Iago and Othello respectively. Kelly delivers a whimsically sly, yet no less menacing reading of the perfidious Iago.

From his first moments on stage in the immediate afterglow of his covert wedding to Desdemona to his guilt-ridden final violent scene, Roderique demonstrates both a tangible nobility and contemptuous rage. This even includes Othello’s epileptic seizure, often considered too overwhelming for theatre audiences.

Among the actors who have less ground to cover, Andrew Cownden is appropriately pathetic as Desdemona’s overlooked suitor Roderigo. Women get short shrift in Othello, but Kayla Deorksen as the ill-fated Desdemona and Luisa Jojic as the dutiful Emilia make the most of their pivotal roles.

There’s just enough to enjoy in Amir Ofek’s versatile scenic elements, without it being a distraction. His set of partially demolished colonial architecture appears to be more in character with the play’s original setting of Cyprus than Charleston. This likely comes about as a result of Ofek having to compromise the design with Bard on the Beach’s alternative production Pericles set in Ephesus.

Costume Designer Mara Gottler clothes the players abundantly in the style of the Civil War with Union army uniforms and crinoline petticoats being the most notable features.

Sound designer Steven Charles’ personally selected battle hymns and traditional folk tunes probably won’t get the attention they deserve, because of how well his soundscape fits within the production’s context.

I am one, sir, that comes to tell you your daughter and the Moor are now making the beast with two backs. – Iago to Brabantio in Othello – was Shakespeare then, the originator of this ribald euphemistic metaphor?