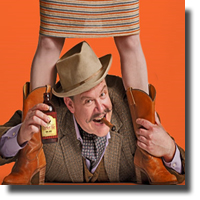 The Merry Wives of Windsor is hardly considered to be one of the Bard’s best; his only play to be set in England during his own time. That was until director Johnna Wright decided it might suit Vancouver audiences to shift the setting from the banks of the Thames to the banks of the Detroit River in Windsor, Ontario. More puzzling though, is that she advances the setting to 1968. However, as with all Bard on the Beach productions, the object is to entertain and Merry Wives most certainly does that.

The text is still Shakespeare, so it means that relocation of time and place works well on some levels, though less well on others. Pam Johnson’s staging in the form of the Garter Inn (a reference to the Order of the Garter) is one element that comes off successfully. So too, does the use of Country and Western music, generally performed live by the same actors who deliver the Bard’s prose throughout the play.

One of the play’s elements that doesn’t translate well to its contrived environs is the subplot that involves three suitors wooing the winsome Miss Anne Page (Kayla Deorksen), whose parents offer a dowry of £700. A few hundred quid may have been a fortune in Elizabethan England, but hardly an amount that would entice anyone into marriage in Ontario in the sixties. Also, because Wright has adhered strictly to the original text, location specific references (like the Thames River) do not relate to the revised setting.

The play opens with a typical Friday evening ‘Open Mic Nite’ at the Garter Inn. The “merry wives” Meg Page (Katey Wright) and Alice Ford (Amber Ford) take their turn on stage with a deliberately hackneyed rendition of These Boots Wee Made for Walking. Meanwhile, Sir John Falstaff (Ashley Wright), a somewhat weaker character than the Falstaff seen in the two Henry IV plays, is a transplanted Brit who finds himself financially embarrassed. Moved by his own deluded vanity rather than good sense, he attempts to ingratiate himself with Mistress Page and Mistress Ford by writing similarly amorous notes to each of them.

Unfortunately for the (prosthetically) rotund, narcissistic Falstaff, “the wives” know each other well enough to collude with each other on the blowhard’s pathetic overture and thus endeavour to plot his comeuppance. What ensues explores the common issues of deceit, jealousy, revenge, coterie and braggadocio.

The immensely talented cast appear to have as much fun as the audience. Special kudos must go to Ashley Wright as the preposterously pompous Falstaff who combines wit, comic timing and agility in carrying additional padding on his already heft frame. His rendition of the Allman Brothers’ Ramblin’ Man in a British accent was priceless. One also had to enjoy Patti Allen’s deliciously camp reading of the Mistress Quickly role and David Marr’s outrageously over-the-top performance as the foppish French Doctor Caius.

Despite the regular obstacles brought about by transferring Shakespeare into the twentieth century, Johnna Wright has brought to the Douglas Campbell Studio Stage a delightful romp that is full of bawdy fun and is a lighthearted celebration of community spirit.