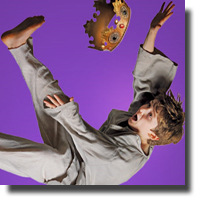 King John had a triumphant opening on Saturday July 14th, playing to a full house. From the first scene, which was frozen as if a family snapshot were being viewed in an album to the final scene with a defeated and dead King John slumped on his throne while the men around him realized the full impact of what had transpired, the audience was held in rapt attention.

The actors took control of the room with the first words they spoke, taking the audience on an emotional journey as the story of King John unfolded. The actors spoke with clear diction, pacing the delivery of their dialogue masterfully . They were absorbed in their roles, infusing each scene with energy and tension, keeping the audience swept up in the play. The glow in a character’s eye (Scott Bellis as King John), the passion of the moment displayed in a chest heaving with energy after a battle (Aslam Husain as Philip the bastard), the desperation of a mother (Amber Lewis as Constance, mother to Arthur) slumped in grief for her young son transported the audience into history. People in the audience sat with their backs straight, leaning forward, engrossed in the actions that played out before them.

Barbara Clayden's costumes were rich in colour, texture and style that harkened back to the 13th century world of King John. In the first scene, as John sits on his throne attended by his mother Queen Elinor (Patti Allan) and his niece Blanch of Spain (Kayla Deorksen), the light reflects off the golden crown of the King and the pale sea green costume of Blanch imparting the wealth, privilege and power that fuels the intrigues and political manoeuvrings that are the theme of the play.

Jamie Nesbitt's projection designs enhanced the storyline to great visual effect. The graphics fleshed out the story line for the audience and deepened the textured layering of the production. Adrian Muir's lighting and Murray Price's sound further enhanced the textured tapestry of King John. One cannot help but think of the Bayeux Tapestry from the 11th century. It depicts the Norman Conquest of England and has the visual texture of history that this production also achieved.

All in all it was a wonderful evening which transported the audience into a 13th century world of political and religious intrigue. The tapestry of theatre that was woven on opening night with the production of King John is relevant today. King John runs through to September 19th 2012. It illustrates why Bard on the Beach Shakespeare Festival is in it 23rd year.