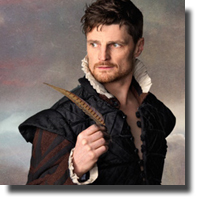 So what’s a backstage drama by American contemporary playwright Bill Cain doing at a Shakespeare festival? Well, for starters, William Shakespeare himself is the central character in Equivocation -- a play within a play. At close to three hours run time, Equivocation is certainly ambitious. It attempts to examine politics, propaganda and the fundamentals of truth itself. As well as a speculative rumination on the ontogeny of Macbeth; the play also offers a rather trite sub-plot that delves into Shakespeare’s unhappy relationship with his daughter, Judith.

Director, Michael Shamata tends to favour the play’s more serious aspects, and while Cain’s play is dense and multi-layered, it provides enough inside jibes at the Bard’s mythic persona to keep the audience chuckling. As King James spymaster, Sir Robert Cecil (played with delicious malice by Anousha Alamian) remarks, “even your existence will be a matter of debate.”

Some of the Bard’s famous verse (mostly from Macbeth) is strewn throughout the play, though often in an entirely different context. For example: If it were done when 'tis done, then 'twere well it were done quickly from the memorable Macbeth soliloquy. Outside of the dialogue filched from Mr Shakespeare, Cain’s language is generally contemporary, further reducing the time span between early seventeenth century and the present.

Equivocation uses actual historic figures in a fictitious account. Shakespeare (or Shagspeare in this play) is commissioned on behalf of the crown through Robert Cecil to write an ‘official’ government spin on the (then) recently failed gunpowder plot to blow up Britain’s parliament. Initially, he turns the project down flat, but eventually agrees to do it after consulting with his theatre troupe.

The gunpowder plot conspiracy may be the most infamous example of political prevarication in history. As Shagspeare investigates the authorized version of events, he comes to realize that he must either compromise his conscience or risk the ultimate sacrifice to reveal the truth.

Just six actors play all the characters in this production, with only Bob Frazer (Shagspeare) and Rachel Cairns (Judith) in dedicated roles. Frazer gives a human portrayal of the celebrated playwright, seeing him as a flawed father and husband, though a playwright in an earnest quest for the truth.

Anton Lipovetsky delivers a solid performance in the dual roles of impetuous English renaissance actor (Richard) Sharpe and a foppish King James, complete with a campy Scottish brogue. Lipovetsky also gives a stirring reading of conspirator Thomas Wintour in the width of his Sharpe role. Every drama needs a good villain and Anousha Alamian is brilliant as the scheming hunchback, Robert Cecil.