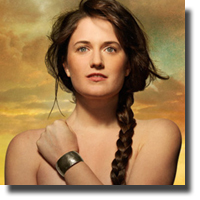 To bastardize a memorable quote from an eminent British statesman from about seventy years ago, rarely have so few done so much with such great effect to the delight of so many. This tidily sums up an evening of comic intrigue and twisted plot that is the world of Cymbeline, now playing at the Howard Family Stage at Bard on the Beach. This play is unusual for Shakespeare, in that it mixes his classic elements of dramatic tragedy with the disguises and confused fun of his comedies. Anita Rochon has directed her intrepid troupe masterfully to mold a potential hodge-podge of characters and plot into a thoroughly engaging, well-paced and easy-to-follow unraveling of antics at the court of King Cymbeline and beyond.

I call the troupe intrepid because eight performers depict eighteen characters and do stage work besides. Yet all is carried off with no distraction, and often with fun for everyone. All of the players are engaging and totally believable. Rachel Cairns plays Cymbeline’s daughter, Imogen, the central figure, and catalyst for the action of the play. Her ability to involve the audience with her emotional moments of astonishment, confusion, disgust and concealment, while still being in the world on stage, attests to her skill in Shakespearean theatre.

Anton Lipovetsky is brilliant as her secret husband, Posthumus, her cloddish would-be suitor, Cloten, and her unknown brother, Arviragus. He lights up the stage as each of these very different men, amazing (and amusing) the audience with his quick changes of character – thanks to directorial magic, well-planned sets, effective sound and light, and imaginative costuming. Shawn Macdonald, Cymbeline’s calculating second wife who constantly connives to get her son, Cloten, declared heir to the throne, is, at first, shocking to behold as queen. This soon passes, thanks to his superbly wicked performance.

As the gentle and good-natured Belarius, the exiled guardian of Cymbeline’s two long-lost sons, Macdonald’s easy versatility shines through. Bob Frazer, who plays an attendant to Cloten and a Roman general, is especially deliciously evil as Iachimo, an Italian nobleman who sets out selfishly to destroy the marriage of Posthumus and Imogen. Benjamin Elliott earns increasing notice and appreciation throughout the evening in his various roles as one of Cloten’s attendants, a provocative Frenchman in Italy, Cymbeline’s other son, Guiderius, and the doctor at the heart of the queen’s duplicity.

Anousha Alamian also amazes the audience in his various roles as Pisanio, Posthumus’ attendant, Philario, his host in Italy, and a Roman captain. So, where, in all of this, is Cymbeline, King of Britain? Gerry Mackay handles this ironically sporadic role wonderfully, weaving his contentment, gullibility, concern, outrage and defiance into the plot with just the right amount of credible authority to motivate new intrigue, new complication, and new action.

If all of this seems a bit confusing and, perhaps, overwhelming, never fear. This entertaining performance, so well planned and executed, keeps the audience thoroughly engaged, greatly amused, and somewhat awestruck at the fun, ease and mastery of the cast as they untangle the confusion, and present an evening to remember. See it.