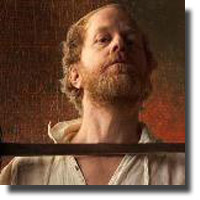 Bard on the Beach
Shakespeare's Rebel written and adapted for the stage by C.C. Humphreys

This past Sunday was an exciting day for Bard on the Beach. Not only were theatregoers introduced to the newly enhanced Douglas Campbell Howard Family stage—the smallest stage at the festival—but they were also invited to attend the opening night of Shakespeare’s Rebel, an original piece written by Canadian novelist and actor C.C. Humphreys. The play is adapted from one of Humphreys’ novels, and in Gaze’s words, “[is] a brand new work, inspired by Shakespeare, with a terrific story”.

Shakespeare’s Rebel is set in London, 1599, amidst the chaos of immanent Irish rebellion and Spanish invasion. An aging, yet fierce Queen Elizabeth (Colleen Wheeler) is struggling to keep her ducks in a row, and turns to the Earl of Essex (John Murphy) to quash the pending revolution and save England from war. Essex isn’t keen on taking on the task however, and enlists the aid of his trusted compatriot, one of the finest swordsmen in England, John Lawley (Benedict Campbell).

Lawley, however, is no longer interested in the life of a soldier—instead preferring that of an actor as he fights to win back the love of his life and their son. Much to his chagrin, he spends the bulk of the play struggling with those who insist on making him the champion of England.

I have to admit that when I took my seat in the theatre I was harbouring a hearty mix of skepticism and curiosity. This being an entirely new play, I had no idea what to expect, and was bracing myself for potential catastrophe. Happily, my fears were not realized. Humphreys’ storytelling skills, along with Gaze’s directing prowess, combine to create an entertaining show founded on a passion for excellence and all things Shakespeare.

As always, the actors outdid themselves, each bringing their own unique flavor to their roles. Campbell and Wheeler stood out for the range of emotions and presence portrayed on stage, while Jennifer Lines, who played Tess--the love interest of Lawley- did a superb job of bringing to life the struggle of a woman torn between love and duty. Special shout out to the unnamed actor who played the gaoler – though his part was small, I really enjoyed the on-stage chemistry between him and Campbell.

Shakespeare’s Rebel serves as a testament to the influence that Shakespeare still has on playwrights today. While the play certainly has its own voice, enthusiasts will note the clear nod to the Bard that pervades Humphreys’ work.