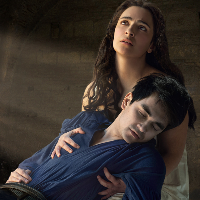 Bard on the Beach
Romeo and Juliet by William Shakespeare

Romeo and Juliet is a time-honoured feature of all Shakespeare festivals, yet patrons return time and again to enjoy this classic tragedy. Sometimes traditional, sometimes changed to new historical periods, dress and language, its theme triumphs over time. How refreshing it is to see a version that takes a new approach to the presentation! This Bard on the Beach production begins at the end of the play, and presents what might be Juliet’s recollections and conjectures of the events that have led to this devastating turn of events.

Anita Rochon’s directing genius presents a riveting performance, that keeps the audience enthralled throughout. The acting is captivating, adding fresh, natural lines and behaviours that really connect in their realism with the audience. Ghazal Azarbad’s Juliet enchants, blending dreamy notions of romance with the stubborn antics of a girl thirteen years old dealing with the custom of marriages of that period. Daniel Fong is a charming Romeo. His performance as an alternately brash, tender, innocently romantic, determined young man is made real with his very natural gestures and expressions, adding credibility to his character. Jennifer Lines is convincing as a strong Lady Capulet, head of a household remarkably short of men in this version of the play. Her elegance, status, ambition and grace are all there in Lines’ strong performance. Andrew McNee delights the audience with his performance as Juliet’s nurse. His comedic skill shines with his remarks, sighs, and antics, adding welcome relief to the various tensions in the play. Rounding out the Capulet household, we have Tybalt, gallantly played by Victor Dolhai. His colourful depiction of chivalry and hot-headed honour is masterful.

Romeo’s cohorts, Mercutio and Benvolio, are no less impressively portrayed by, respectively, Sara Vickruck and Angus Yam. Vickruck’s depiction of a wise-cracking, fun-loving companion is delightful and believable. Yam’s performance as a faithful and convivial friend and protector shows genuine warmth and authenticity. Anita Wittenberg’s well-intentioned and helpful Friar Laurence is very ably depicted, especially credible - to the audience, at least - when counselling Romeo about fickle romance. Ishan Sandhu effectively portrays a pampered and somewhat smarmy Prince Paris in a pleasing interpretation of the character.

The actors’ talents are complemented by the wonderful talents of the production staff. Jenny Kim’s stage management is instrumental in the smooth flow of the production. Action is focused at various places on Pam Johnson’s cleverly designed sets. Sophie Tang’s lighting is instrumental in drawing the audience into every moment as the story unfolds. Joelysa Pankanea’s unique musical and sound composition for this production is impressive, almost subliminally blending chimes and chorus to draw the audience into the action with sounds reminiscent of the historical period.

This production of Romeo and Juliet is a credit to the excellence we have come to expect from Bard on the Beach over the years. The standing ovation and two curtain calls that this performance received are testament to that.