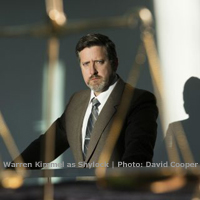 Bard on the Beach
The Merchant of Venice

A nasty play filled with nasty people. That is the unabashed take on The Merchant of Venice of director Nigel Shawn Williams, there is no hiding the more unpleasant aspects of this play. Anti-Semitism, racial prejudice, intolerance for foreigners and misogyny raise their ugly heads and are allowed full scope.

Williams sets the play in modern dress designed by the talented Drew Facey, all silks and cell phones and enough glamour to make a fantastical Venice in which a fathers last will and testament can force a daughter to marry the man who solves a riddle without violence to reason.

From the purposeful walk of Venetians going about their daily business in the opening scene, striving and energy fill the stage. Without breaking stride, Antonio (Edward Foy), merchant of Venice, collides with Shylock (Warren Kimmel), financier and Jew, and sends him crashing to the ground. Shylocks dignity and contained torment are palpable, the action shocking. But it is immediately clear that Antonio and Shylock are a well-matched pair, each successful, aggressive, ruthless, unforgiving. It is their enmity which drives Williams narrative.

In Belmont, the brow-beating world of Venice is exchanged for the apparently serene world of the affluent Portia (Olivia Hutt). Williams makes it very clear that by the terms of her fathers will she is effectively a prisoner and also that she is not outside Venetian venality. She makes xenophobic jokes about the boorish habits of the foreign suitors who have come to seek her hand. Worse is the arrival of the Prince of Morocco, played with dignity by Nadeem Phillip, who horrifies her as a husband because of his complexion, worst of all is the arrogant Prince of Arragon (Paul Moniz de Sa). The luminous Olivia Hutt ratchets up the tension as she moves from complaining about her lot to truly understanding the implications of her fathers will - a forced marriage to an unknown man.

In the violent energy of Venice and high-strung emotion in Belmont, Williams has established two very strong arenas which come together at the court hearing. Shylock, Antonio and Portia (disguised as a lawyer) face off with sparks flying.

The third strand of the plot revolves around Bassanio (Charlie Gallant). In Venice, Bassanio is a bit-player without a hint of charm, a fidgetting wastrel with louche friends and superficial opinions.. He is much the same person in Belmont. And yet, Antonio accepts a gamble with the highest of stakes to please him and the admirable Portia is head-over-heels in love with him. Williams clearly sees no use for romantic love or affection of any sort, but it would balance such a combative production with some hope. To be fair, Williams adds a coda: on an empty stage in a contemplative reprise, Portia returns to her line, "Nothing, I see, is good without respect."

The Merchant of Venice is all about risk. Bard on the Beach has taken a big one; Williams has run with it and you should too. But please, take it as a warning, not an example to follow.