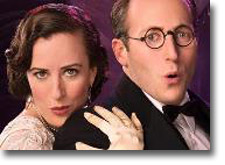 Love's Labour's Lost is one of the few Shakespeare plays (perhaps the only one) that was written without obvious influences – in other words – an original. For this Bard on the Beach production, Director Daryl Cloran has moved the setting from sixteenth century Europe to a Chicago speakeasy in the ‘Roaring Twenties’ and the prohibition era.

For this mounting, Cloran has streamlined the list of characters by omitting three secondary roles: Longaville, one of Ferdinand’s close friends, Maria, one of the Princess’s attendants and Sir Nathaniel . Contrariwise, he has included a fair chunk of the American Songbook. Popular jazz tunes from the time: “Ain’t Misbehaving,” “Night and Day” and “But not for me” helped make it an entertaining evening. Though, the performance of songs like “If you were the only girl in the world” and “Paper Moon” pushes the show in the direction of Vaudeville.

The play draws on the theme of wanton desire, with reality and fantasy juxtaposed. Its premise follows Ferdinand (Jay Hindle), a gangster who calls the shots when it comes to selling illegal liquor on Chigago’s South Side and the proprietor of the Navarre speakeasy swearing off on the company of women for three years to concentrate on academic goals. His two companions, Berowne (Josh Epstein) and Dumain (Daniel Doheny) are persuaded to join in, but just like in the famous Seinfeld episode, pacts demanding abstinence from carnal urges are hardly ever followed through.

Their pact is put to a stern test when the coquettish Princess (Lindsey Angell) and her captivating attendants Rosaline (Luisa Jojic) and Katherine (Sereana Malani) arrive on the scene to discuss an outstanding debt. Predictably, the “no women” covenant is ultimately renounced.

This might be the best looking cast I’ve seen tread the boards in a Bard on the Beach production. Lindsey Angell, Sereana Malani and Luisa Jojic show that they can sing as good as they look with the Cole Porter song “Night and Day” Although, the song wasn’t written until the thirties.

Andrew McNee as a swashbuckling Don Armato shows off his penchant for musical theatre with his sidekick Lili Beaudoin in a song and dance rendition of “A smile will go a long way” and a solo “But not for me” with (faux reluctant) piano accompaniment from music director Ben Elliot. However, his semi-drag performance of Sophie Tucker’s signature song “Some of these days” was, alas, pure ham!

As with just about all Bard on the Beach productions, I’m amazed at the quality of costumes. Designer Rebekka Sorensen-Kjelstrup brings the same level of tone to the men’s clothing that includes Elliot Ness shoulder holsters, tailored vests and polished shoes.

Artistic Director Christopher Gaze receives as much criticism as praise for his productions of Shakespeare comedies – but who can argue with his success.