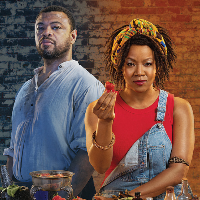 Bard on the Beach
Harlem Duet by Djanet Sears

Harlem Duet is a domestic drama written by British born, Toronto-based playwright Djanet Sears in 1997. It centres on the disrupted married life of Billie and her want-away husband Othello who live in a rented apartment in Harlem.
The play time shifts between the 1860s, a period just prior to the abolition of slavery and in 1928 that shows Billie and Othello's relationship in analogue form; while the bulk of action takes place in the time that the play was written. Sears draws inspiration from Shakespeare's play Othello, though the characters and the story are original.

Harlem Duet asks the audience to envision how Othello might be conceived through the lens of a black woman in the modern era. In Djanet Sears’ concept, it’s not Othello who is betrayed by his supposedly loyal lieutenant, but rather the story’s protagonist Billie, who is betrayed by her spouse in all three of the play’s settings as he seeks the attention of a white woman. Needless to say, each situation incurs pain and suffering on Billie and even worse on Othello.

Marci T. House turns in a tour de force performance as the hyper-emotional and ill-fated Billie. She thoroughly articulates the pain of loss intensely. As a black woman, proud of her race, her anguish comes from her husband perceived sellout to choosing a white woman over her as the act of infidelity itself.

As Othello, Donald Sales gives each era's Othello a distinct nuance and even charm. Certainly, many in the audience will feel that he gets what he deserves, but Sales’ convincing portrayal allows for the complications of a modern black man. I have to confess though, the metaphor (or irony) of a black man applying blackface make-up by-passed my understanding.
Among the actors who have less ground to cover, Liza Huget as irrepressible Magi and Marsha Regis as Billie’s dynamic sister-in-law Amah provide some welcome levity to both Billie's life and the show as a whole. Tom Pickett delivers a delightfully understated performance of the oddly named Canada, Billie’s estranged father.

There’s just enough to enjoy in Rachel Forbes’ superbly constructed scenic elements, without it being a distraction. I was happy to see guitarist Alexander Boyton and violinist Marlene Ginader visible on stage through the entire show. The production boasts both a fight director and an intimacy director, though there isn’t much to see of either.

Director Cherissa Richards maintains an even pace throughout, to the extent that one hardly notices that the play is two and a half hours long.

Harlem Duet is not Shakespeare. Though the play is certainly thought-provoking and perhaps even more relevant in today’s socio-political climate than when it was written.