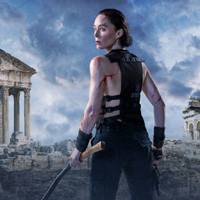 Bard on the Beach
Coriolanus by William Shakespeare

Coriolanus should not be anyone’s first experience of William Shakespeare. Among the reasons it’s not presented by theatre companies all that often, is firstly, this dense tragedy is arguably one of the Bard’s more challenging plays. It is certainly lacking sympathetic characters; even the titular character has more flaws than virtues. Secondly, the play is loaded with ideological discourse about politics and class distinction.

Ciaus Martius, the central character – SHE doesn’t get the surname Coriolanus granted to HER until half-way through the first act – is a female warrior, fearless on the battlefield. But she holds scant regard of political process and even the common people it deems to serve; a disposition that ultimately brings her down. The fact that Ciaus Martius Coriolanus (Moya O’Connell) is a female role in this production is a major departure from Shakespeare’s original.

O’Connell is dominant in what is a demanding physical role. Though, she perhaps looks a little too wholesome and lightly built to be a hard core, war-hardened general with the battle scars to show it. Unlike Colleen Wheeler, who as Coriolanus’ mother Volumnia definitely looks the part. Wigged in stringy grey hair and costumed in austere clothing, she manages to prevail as a real Shakespearean heroine.

I generally have no issue with the gender switch and O’Connell is full value as the anti-heroine. However, it does somehow complicate the role of Virgilio, Coriolanus’ chaste, obedient spouse awkwardly played by Anthony Santiago. It might have been better had the role been eliminated from this production.

Praneet Akilla and Craig Erickson as tribunes Brutus and Sicinius are exceptional villains, and just like real politicians, when their plan to banish Coriolanus develop unsavoury repercussions they shift the blame onto others.

Dean Paul Gibson delivers a basic open staging that is versatile enough to stand in for multiple locations. Declining high concept, he prefers to emphasize Shakespeare’s weighty dialogue. Set in Rome, at a time possibly in the near future, Gibson’s stylistic concept is that of a futuristic dystopian setting. It calls for a director who knows exactly what kind of story to be told and fortunately, Gibson knows.

Barbara Claydon’s clothing that range from the soldier’s commando style combat gear to conventional suits worn by the patricians and the raggedy garb worn by the plebeians bring a level of quality to the production.

If I have a single gripe, it’s that some members of the cast seemed to want to get done with their share of the lengthy dialogue as quickly as possible, so that one had to strain to understand the meaning of what was being said. I would expect the cast will deliver portrayals that are more relaxed in future performances.

For those who enjoy a fresh take on a Shakespeare tragedy, they will almost certainly find this production satisfying.