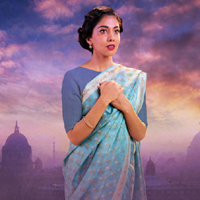 Bard devotees generally consider All’s Well That Ends Well a problem play – and for good reason. Shakespeare’s comedy is about self-deceit and trickery (both in the main plot and subplot). First, it’s difficult to reconcile the protagonist’s motivations in the context in which this nebulous play is placed. As her reward for curing the Viceroy of his debilitating illness, Helena chooses arguably one of Shakespeare’s least attractive characters, Bertram as a husband. Second, in the play’s original form, class discrimination is dealt with head on. In this stylish BOTB production, that may just owe something to Bollywood, cultural prejudice is thrown together with class prejudice.

Directors Johanna Wright and Rohit Chokhani relocate the setting from seventeenth century France to India at the time of Mohandas Gandhi’s independence movement against the British Raj (colonial rule). While the political backdrop is factual, the characters and plot are fictional. Gandhi is never referenced except in a faux radio broadcast. The king of France is replaced with the Viceroy to India and the Countess of Roussillon is just... Countess.

Does the concept work? In the main, yes. Wright and Chokhani should be lauded for bringing an innovative and colourful production to not only a community that might not have shared the Shakespeare experience, but also regular Bard enthusiasts looking for something different. However, despite bringing moral clarity, the time and place of the setting provokes even more perplexity in an already tenebrous play. Why would an intelligent, self-possessed Indian woman pursue a British man whose presence in her country is no longer relevant, and one who treats her with so much scorn? Bertram himself uses the excuse that Helena is low-born, though it doesn’t preclude him from being smitten by Diana – a woman further down the social ranking.

Sarena Parmar delivers a measured performance of Helena; she is a woman who knows what she is entitled to and sets about getting it. Helena has to convince us, the audience, as well as Bertram. To this end, Parmar succeeds admirably. Pam Patel gives a sparkling performance in the role of the coquettish Diana. I would like to have seen more of Bernard Cuffling, who puts in a delightfully droll and understated portrayal of the Viceroy. I had to feel some sympathy for Jeff Gladstone. In this mounting, the role of Parolles is somewhat diminished. He also has to suffer through the humiliation scene that continued for twice as long as it should.

Pam Johnson’s open, well-constructed set adapts easily to the many locales in the play. The earth tone textures and architecture are typical of those seen in Northern India. The accuracy of Carmen Alatorre’s clothing, particularly as applied to the saris worn by household staff and military uniforms worn by the British officers and Indian servicemen help make All’s Well That Ends Well a quality production.

Shakespeare purists may disagree, but I believed that Poonam Sandhu’s choreography and Ruby Singh’s composition in both the opening scene with the household servants attired in white saris enjoying social time, then later in the wedding scene provided an aesthetic exotic flavour to a Bard presentation.

Perhaps Shakespeare was ahead of his time; despite literary contradictions, All’s Well That Ends Well can be a celebration of female strength and steadfastness - anywhere in the world.