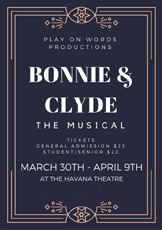 Play On Words
Bonnie and Clyde: The Musical

This is the exhilarating true story of ill-fated lovers, Bonnie and Clyde. During the Great Depression, they became two of America’s biggest folk heroes and American law enforcement’s biggest problem.

Adapted by Frank Wildhorn, Don Black and Ivan Menchell, Bonnie and Clyde: The Musical is a fearless depiction of the couple’s wild passion and thirst for fame told through memorable music and relatable characters.

The actors in the title roles are Charlie Deagnon (Clyde Barrow) and Sherry Freeman (Bonnie Parker). Deagnon, at first glance, doesn't look like a “bad boy” yet his acting and vocal power are so superb you quickly forget.

Freeman is a red haired moll who looks and sounds as if she walked off an MGM set from the 1930s. Complementing them are actors Will Hopkins playing Clyde's brother Buck and Cassady Ranford playing his wife Blanche. The pair are an excellent combination of comic relief and heartbreak with just the right amount of southern charm, and also vocal powerhouses.

Standouts include Stefanie Stanley as Bonnie's mother Emma who provides an earnest and passionate performance, and Sabrielle McCurdy Foreman (The Preacher) who has a nice gospel voice. I should also mention Taylor McKee (Young Bonnie) and Jason Sakaki (Young Clyde) who have limited stage time, but have excellent voices at such a young age.

The set design is simple yet effective with walls covered in newsprint and real life photos of the notorious duo, and key set pieces that are functional without being cluttered.

The other designs are not as effective. With limited options, Andrew Chui’s lighting is interesting but bathes the actors in a blue wash that often puts shadows in their faces.

Costume designer Marci Herron has come up with some nice authentic dresswear, but the overall look feels incomplete especially with the absence of Bonnie and Clyde's iconic headwear.

The remainder of the ensemble, who take on multiple roles, are strong vocally and are all well showcased. Choreographer Lyndsey Britten keeps the movement simple, but clean and effective, infused with energy and physicality.

Director Ryan Nunez, in a choice that's probably more functional than aesthetic, keeps the actors onstage all the time. That to me symbolized that even out of the public eye, someone is always watching Bonnie and Clyde.

The band is tight and impressive under the hand of Marquis Byrd and creates a full sound, but again, the problem with a small theatre sometimes the vocals are drowned by the sheer volume of the musicians.

Overall, Play on Words Productions puts on a more than admirable production of Bonnie and Clyde. Kudos to them for producing a musical not done that often.