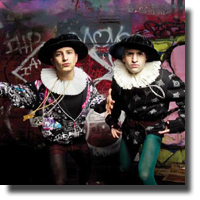 I was a bit skeptical when I came in to see this show, especially in the first part. I didn't know what was happening; I'm not a big fan of hi-hop and rap; this is silly. I kept wondering how the hell this show could have won a Jesse award. But as this no-intermission, 100-minute show progressed, I started getting the feel of it. These tremendous athletic actors got the the audience wound up, doing rap gestures and chanting with them. Furthermore, their physicality got them running all over the Revue area--running through aisles and jumping over seats. "My, my..." I said to myself. and a smile finally took the place of my skeptical frowns.

Based on Shakespeare's Comedy of Errors, this fast-paced, musical “ad-rap-tation” of Shakespeare’s comedy of mistaken identities came through successfully, even getting the audience on their feet at curtain call with "wows" and accolades for the effort these actors, playing multiple roles--from prostitutes to dance girls, from policemen to Jewish merchants, etc., etc--how these fantastic actors put their all into this play..

I could see from the notes and bio of director Catriona Leger how much she was into Shakespeare and rap. In fact, she quotes Tupac Shakur who said that iambic pentameter (Shakespeare's rhyming in his plays) "is rap--it's the structure".

This is a must-see show not only for rappers, but for everyone, because it's something unique, giving that hip-hop flavour to Shakespeare who, if he were alive today, would be rapping and doing break dances.