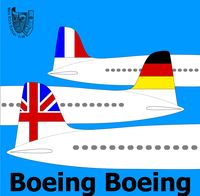 What a zany show! The audience, as well as the actors, enjoyed watching/performing this French farce, with doors opening and closing, and characters coming and going. The actors were fabulous! What talent: Alexander Morris, Stefanie Colliar, Kirstin Shale, Robert Feher, Tegan Verheul, and especially Robyn Bradley as Berthe.

The jam-packed matinee audience last March 6th were laughing and applauding, especially in the scene when Robert Feher dropped his spectacles accidentally and one of the lenses fell off. Apparently, there was a little adlib going on, and the audience loved it and applauded Feher for his presence of mind.

Comedy is hard to do. You have to hold for laughs, and you have to have perfect timing. And these talented actors showed the audience what talent they really have. The audience also enjoyed Tegan Verheul as Gretchen, the German flight stewardess. She stole the show with her comic presence.

The set by Andrea Orlund was gorgeous; the colourful costumes by Stella Gardner reflected the swinging 1960s; and the direction by Ryan Mooney was pristine. Kudos to producer Josh Fuller and the entire production staff for a delightful show.