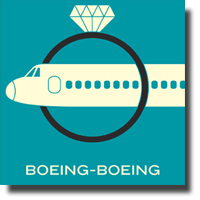 What a funny show! The Surrey audience during the opening preview last October 16th was in stitches laughing all throughout -- the six actors were hilarious and full of comic energy. Colleen Wheeler and Andrew McNee (the only two original cast members), Luisa Jojic, Kevin Kruchkywich, Bonnie Panych, and Melissa Oei acted this bedroom farce with physical comicity at its finest.

First produced in Paris in the 1960s, it's been a hit for more than 50 years, especially in the English translation of Beverly Cross and Francis Evans. It's been produced many more times in English.than the original French.

Bernard (Kevin Kruchkywich), an American architect living in Paris, is a Casanova who manages to juggle relationships with three flight hostesses: Gloria (Melissa Oei) from TWA., Gabriella (Luisa Jojic) from Alitalia and Gretchen (Colleen Wheeler) from Lufthansa. Since all three girlfriends are airline stewardesses with different schedules, he is able to avoid simultaneous layovers. .

But then, the new super-jet Boeing is introduced, and changes the flight schedules of all three airlines, and there's where the mayhem begins. Bernard’s system begins to collapse around him, and it’s his overworked housemaid, Berthe (Bonnie Panych), and his friend Robert (Andrew McNee) visiting from Wisconsin who have to rescue him. Robert, who accepts an invitation to stay at Bernard’s apartment, finds himself getting involved, but finds some benefits in the course of covering his friend’s tracks.

Panych manages to steal the show in many of the scenes, and I partcularly enjoyed Wheeler's portrayal of the headstrong Hitler-like Gretchen. Jojic was Italian through and through with her accent and gestures, and Oei was just the right fit for the materialistic New Yorker which French playwright Camoletti was making fun of.

Director David Mackay did an excellent job with the pacing of the play, and let his actors be physically comic without falling into exaggeration and overacting.

If you want to get out and have some good laughs, then this is the show to go to.