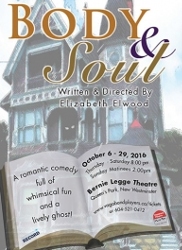 This is quite an entertaining show and appropriate for the Halloween season, as it deals with a ghost inhabiting one of the heritage mansions of New Westminster. The Vagabond Players also celebrates its 80th year anniversary, and there were sandwiches and a birthday cake during intermission.

This is a fine play, and I enjoyed it a lot. The first act dragged a bit with so much dialogue between Timothy (Alex Ross) and Jenny (Tracy Labrosse) that, I thought, could have been edited.. But the second half picked up and got funnier as the pace and action quickened.

The actors were well-prepared and owned their lines, as though they were the characters themselves. I enjoyed, in particular, Jacqolline Keath who plays the ghost of Mary Fairfax. She's got that comic streak in her.

The set design by Elizabeth Elwood who also directs the play is exquisite. That vintage set of a heritage home comes out so well with the wallpaper and furniture of yore.

The supporting actors--Kurtis Maguire, Mike Parker, Alison MainTourneur, Jeremy Heymen, and Heather Evens did quite well acting their parts. Kudos to the company's production staff for an enjoyable production.