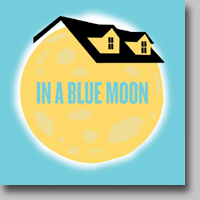 In a Blue Moon by Lucia Frangione

Dates and Venues January 8 – 30, 2016 | Various venues around the Lower Mainland

Opening night at the Surrey Arts Centre last January 13th appeared to be quite successful, as the audience laughed at some of the dialogues and the three actors received a warm applause during curtain call from an almost full-house Surrey audience. This play is touring the Lower Mainland until the end of January, and will be in Surrey until January 23, and will continue its tour to Mission on January 25, and finally, Coquitlam from January 26 to 30.

When Ava and her daughter, Frankie, move to an inherited cottage near Kamloops, they discover that Ava’s late husband’s brother, Will, is already living there. What starts as a tense relationship develops in unexpected ways as Frankie finds a role model in her uncle and Ava grows attached to the companionship of this other man. This "love attachment" doesn't come into fruition as Will is already committed with another woman.

Frangione is internationally known for her play Espresso which has been produced in England, Poland and the United States. She has authored over 28 plays.