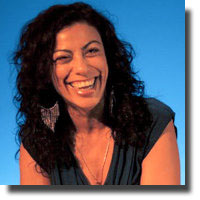 Coincidental with her forty-seventh birthday, Carmen Aguirre opened her one-woman show at Granville Island’s Revue Stage. Dressed in a blue sleeveless blouse and blue jeans that fit where they touch, she wastes little time in revealing that the unique title of her show is actually a euphemism for a purposeful part of her anatomy.

She still has the figure of a woman half her age, but her attractive round features are showing the signs of the stress of too many harrowing exploits from her stint in the counter revolutionary movement against the Pinochet regime.

With poignant humour, palpability and her own potent sexuality, she chronicles her fascinating true life adventure as a courier in the Chilean Resistance, while essentially posing as “petit bourgeoisie.” She and her compatriots were pitted against General Augusto Pinochet’s fascist regime during the country’s turbulent eighties.

Aguirre has led an intriguing life for sure. She talks about being shadowed by a mysterious “blue-eyed man,” while all the time living in mortal fear of torture, or even execution crossing the mountainous Chile-Argentinean border with illegal documents and falsified identification.

Aguirre wisely anticipates that a ninety minute monologue about the perils of a female freedom fighter might be too much for most Canadian audiences to take in. She therefore dovetails an absorbing subplot about four men that have had an impact on her lascivious sensuality. Two of whom she married.

The storyteller weaves in facets of relationships with: her first husband, tortured to within a breath of his life, her second husband, to whom the marriage lasted only four months, Billy, a mid-west teenage phone-sex caller who wanted her to give up her “career” in Vancouver to become his girlfriend and a handsome Los Angeles Chicano that she only refers to as “Visionman.”

Agguire makes it easy to understand her ardour for Visionman, an egocentric, third-rate television actor who seems long on self-absorption, but short on urbanity. She uses her infatuation with Visionman as a metaphor for the unconditional love to her country.

My only complaint was that Aguirre’s ‘slicing ‘n dicing’ of the storyline was so finely colligated that at times I was struggling to stay on track. This issue was partly compensated by the performer’s smooth dance moves to the spicy Latin music that interspersed the production.

Carmen Aguirre is a warrior, a survivor, a rule-breaker and a performer able to exploit her physical appeal to engage her audience.