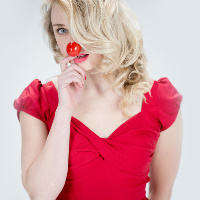 Dates and Venues ON TOUR January 2 – February 3, 2019 at various theatres throughout the Lower Mainland

This is the kind of play where you expect something different every night. In fact, in the programme notes, director/creator Rebecca Northan said that some audience members think the blind date in the show is a plant in the audience, but she says it’s not so. Greg who was Mimi's blind date at the opening in Surrey seemed almost professional in his improvs. He described himself as a mechanic for RVs. He didn’t sound like a professional actor, but he seemed quite relaxed delivering his lines and going along with the dialogue. Really convincing!

Before the show started, artistic director Ashlie Corcoran was mixing with the audience together with Degenstein asking if we were interested in being the blind date in a future performance, but I declined as I was a critic and I’d stick to reviewing the show.

Well, the show was something quite unique, and apparently, the company has performed successfully more than 750 times in the past 10 years all over Canada, the US, off-Broadway and London's West End.There’s even a version called Queer Blind Date. I wonder when they'll do this.

It was an entertaining show. Lots of laughs and a standing ovation and cheers especially for Mimi and Greg during curtain call.