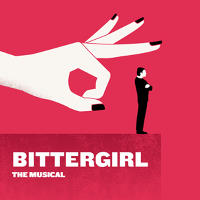 Dates and Venue February 16 – March 15, 2017 | Various venus across the Lower Mainland
Following the Lower Mainland tour, Bittergirl: The Musical will run at the Granville Island Stage from June 15 to July 29, 2017.

What a show! The stars, with full energy oozing from their bodies, (Cailin Stadnyk, Lauren Bowler, Katrina Reynolds and, as the lone guy among them, Josh Epstein), got the opening night audience at the Surrey Arts Centre, all throughout the performance, laughing, clapping and thoroughly enjoying this musical. They got a prolonged standing ovation during curtain call.

This musical narrates the romantic breakups of three women and the antics that ensue. ’60s girl group music, like “Be My Baby,” “And Then He Kissed Me,” “Ain’t No Mountain High Enough” and “Where Did Our Love Go?”, provide a backdrop for the bittergirls’ journey back to happiness.

Although I felt this show was meant for women who got dumped by their husbands and lovers, making the men the villains, it still provided entertainment par excellence. The actors sang the song hits of the 1960s with elan, and the audience, especially the seniors in the audience, easily recognized these songs by composers like Burt Bacharach and Phil Spector.

The Arts Club version of the musical is directed by Valerie Easton, the first woman to do so. In an interview with Tom Zillich (Surrey Now), playwright/actress Annabel Fitzsimmons who came from Toronto to promote the Lower Mainland tour, said. "That’s another interesting element with this version, seeing how it’s produced with a woman in that role,” “I can tell you that there is a different feel with it here in Vancouver, absolutely.”

The original play, bittergirl, which starred the three Canadian writers, became a smash hit and was performed in London, New York and Toronto from 1999. Next came the book, “BITTERGIRL: Getting Over Getting Dumped,” published in 2005. And as a musical, it premiered at the Charlottetown Festival (P.E.I.) to sold-out houses, thesame year.

Following this current winter tour of theatres from West Van to Mission, the musical will play the Arts Club’s Granville Island stage in June and July. It's currently at the Surrey Arts Centre until March 4.