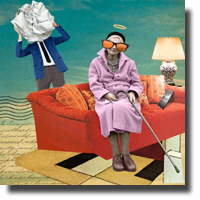 “Family is a crucible to turn passion into love” – these are the words of a son trying to define his complicated but very tight-knit family and its relation to the stories of the bible. For this family, fighting is a sacrament that has its own rules – or more aptly, its own set of commandments.

Playwright Bill Cain named his lead character after himself, removing any question about whether the story is autobiographical (it is).  Cain wrote How To Write A New Book For The Bible from his experiences caring for his ailing mother. But the story is not just of a mother and son relationship, but the story of an entire family in a series of bittersweet, beautiful, and often quite humourous flashbacks (executed onstage brilliantly by director Morris Ertman).

Built like a monologue interspersed with dramatic action, the play is told from the perspective of Billy Cain: writer, priest, son, and brother. Anthony F. Ingram plays the part of Billy as if it were written for him, and though I’ve been won over by Ingram’s performances previously (Wittenberg), his performance was thoughtful and poignant – more than once the room got a bit dusty in there (read: I was teary).

Erla Faye Forsyth plays a heartfelt and spirited performance in the role of Billy’s mother Mary, a stubborn, proud, and determined woman who is as passionate about sports as she is about her family. The bond between mother and son is self evident but complex; but as Billy Cain himself points out, even Jesus left home and didn’t return to visit until he was 30. Though, as pointed out by both Billy and Mary, “biblical mothers are very sneaky,” an assertion to which Mary dutifully conforms.

Byron Noble tenderly plays the role of the late patriarch of the family, Pete, an important supporting character as he reveals intimacy that is present between husband and wife where simply the story of a son and mother would not offer such important details.  Daniel Arnold, who along with Noble also shoulders the part of several other miscellaneous characters, plays Billy’s angry and distant brother Paul in a forceful performance that involves much anger and self criticism.

Playwright Cain combines humour and heartache very successfully in his play, and all four actors bring Cain’s characters to life in an incredibly poignant and talented performance. Bill Cain’s affection for his family and well-written dialogue combines with director Morris Ertman’s vision and affinity for this story to create a great night of theatre.