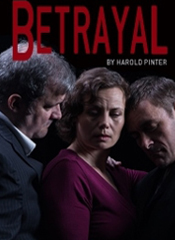 I didn't quite like this play, compared to his earlier "comedies of menace". This play written around 20 years after his debut as a playwright in 1957 with The Room is considered a "memory play", somewhat autobiographical, reflecting his own betrayal as a husband when he had an adulterous affair with a BBC employee, Joan Bakewell.

Unlike his "menacing plays" (The Room, Dumbwaiter, Caretaker, Birthday Party, etc.), this play didn't appear too interesting for me. The three main actors (Corina Akeson, James Gill and Tariq Leslie) were good but if a play isn't interesting, no matter how good the actors are, it'll fall flat.

The theatre-in-the round is interesting, but it has its flaws. When an actor turns his back to a section of the audience in the theatre, we lose part of the conversation because you just can't hear him well. The concept of sand falling on a glass in the middle of the stage is intriguing, but what is it trying to say? The only answer I have is that Jerry (Leslie) drinks a lot of booze, but it has no bearing on the play. I also noticed Leslie wearing the same shirt from beginning to end whereas the other actors constantly change their costumes. This to me is quite inconsistent because we're talking here of different scenes from different years, and don't tell me that Jerry has only one shirt during the 9-year period the play takes place.

One interesting factor which again reflects the anti-conventional feature of Pinter is the reverse chronology that occurs in the play. It starts off in 1977 when they meet in a pub and ends in 1968 during a party when Jerry surprises Emma in her bedroom and declares his love for her.

What went through my mind as I was watching was the fact that many playwrights after achieving success, start to fade and lose the creative juices they had when starting as hungry playwrights. It's something in human nature: you're hungry and you do your best to survive, but once you reach your peak of glory, you lose it.