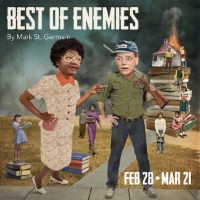 Set in Durham, North Carolina at the start of the 1970s, Best of Enemies is based on the true story of an unlikely friendship between civil rights activist Ann Atwater and KKK leader C.P. Ellis, who join forces to co-chair a set of meetings to institute nationally-mandated desegregation in the racially tumultuous South. Actually, to say this is an unlikely friendship is an understatement. Atwater and Ellis are like a mongoose and a snake, literally mortal enemies.

The hatred between them is palpable; Celia Aloma as Atwater credibly delivers a very real and unstuttering fiery rage towards C.P. Ellis, played by Robert Salvador. And Salvador, who has the unenviable job of portraying a violently hateful KKK leader, is not only believable but actually incited a physically ill response in me, first when he threatens a stoic and patient Washington-sent mediator Bill Riddick (played sympathetically by Anthony Santiago) with a tire iron, and again when he is sporting his KKK costume, ranting to an invisible crowd of bigots.

Aloma and Salvador have great on-stage chemistry, and their flawless southern accents will truly transport you to North Carolina, circa 1971. Like Annette Bening in American Beauty, as a reviewer you know I watched them very closely, and they didn’t screw up once, so, compliments to the cast and to Erin Ormond, listed as Dialect Coach in this production.  .

My only concern was that both Atwater and Ellis’s characters seemed to become cooperative friends awfully quickly. The story of two violently angry people quickly teaming up to fight racism was almost insultingly simplistic, as I would assume the truce did not come so easily in true events. However it did serve to conveniently push forward the action within the short running time of the play, and afterwards I felt compelled to research the full story of Atwater and Ellis, so it’s possible offering the story in a nut shell to pique one’s curiosity was the intention all along.

A highlight of the performance is Rebecca deBoer as C.P.’s ailing wife, Mary, who has a smaller part amidst this 4-person cast, but whose  earnestness and sweetness is the one element that makes you think perhaps C.P. could change that quickly after all with such a deep-hearted partner by his side. Another highlight of the show was the set design by Sandy Margaret; it featured a floor-to-ceiling complex mess of assorted 1960s racially divisive paraphernalia, such as a confederate flag, protest signs, and assorted KKK items. Prior to any action on stage, the stage design’s visceral nature did a great job to prime the audience for the emotional intensity of the performance to come. A large stain-glass cross is subtly embedded into the wall of the set and shines blue in Atwater’s scenes, and red in Ellis’s scenes.  Then during the desegregation mediation it shone a mix of red and blue, an interesting detail.

Best of Enemies is a great albeit coles notes’ version of a story that sadly we can still find relevant today, almost 50 years later. It’s about finding common ground through the lines that divide us. We may be different in our race, our gender, and our politics, but given the opportunity I think we can all find something to fight for, in this instance the rights to an education for all incomes and classes of people.