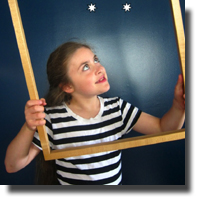 The Shadbolt Centre for the Arts and BellaLuna Productions
Befana’s Star: A Traditional Italian Christmas Story

This ‘famiglia’ Christmas story is uite refreshing, for a change, since most children's shows are pantos. This is a somewhat panto-style show, the Italian way, but different, of course. First of all, it's shorter (45 minutes), which is good, owing to the short attention span of children, plus from my point of view, more interesting in that it not only entertains but educates us on a legend most of us never heard of before, instead of the good ol' Santa Claus we're accustomed to.

This beloved Italian holiday story adapted by Susan Bertoia is based on the legend about an eccentric, old Italian woman who decides to follow a bright star that appears in the eastern skies, and bring some of her cakes and cookies as gifts to the newborn child Jesus. This feast day is known as ‘Epiphany’ in the Catholic calendar, and takes place on January 6th which led The Three Magi to Bethlehem to meet the Child King.

It was an enjoyable matinee, and a lot of kids were sitting in the front row and reacting uite well to the show, especially the Three Magi who are dressed up like the Muppets, and visit Befana with their camels. Bertoia plays two roles in this play, and it's surprising how the audience only recognizes her as Befana when she comes in as the modern Mom in the curtain call, and not as Befana.

The narrator Stefano Giulanetti as Dottore / Narrator was very convincing with his Italian accent. Sabine Freschi as the Child had stage presence, but needs to work some more on voice projection. Befana's helpers (Carley Hodges, Katie Karjala, and Moses Caliboso) who also played the Magi puppeteers were very good. And the musician, Alison Jenkins,played her notes just right.

In most Latin countries, this feast of gift-giving on January 6th is more prevalent than Santa Claus on December 25, although today, both days are gift-giving days.

Kudos to Director Marco Soriano and the production staff for an enjoyable show! There's one more show on January 6th at the Italian Cultural Centre.at 7pm. Be sure not to miss it.