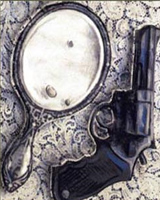 Bea’s Niece played to a full house on Friday night. Playwright David Gow started in the theatre as an actor and has written several full length plays that have been produced in Canada and the United States.

The opening scene introduces the audience to Anne Hirsch (Lisa Pope), the central character, who has been committed to a mental hospital. As the play unfolds the audience begins to realize that Anne is unable to distinguish reality from fantasy. The playwright captures the attention of the audience by also confusing them as to what is real and what are Anne’s imaginings.

Dr. Beth Ottis (Heather Evens) has the task of trying to help Anne learn to cope again and to resume an independent life. It is a difficult task as Anne has a desperate need to hang onto people who are no longer with her in the real world. She has lost her will to live because the people who meant so much to her are no longer in her life.

Anne is also hiding from a terrible truth. She has to come to terms with the reality of that truth before she can be whole again. Through the introduction of the other characters in the play the details of Anne’s life are sketched out for the audience.

Aunt Bea (Karen Golden) is the aunt who has had such an impact on Anne as a child. Bill Hirsch (Pierce Ivan) is the husband who has supported Anne emotionally and practically throughout their life together. The scenes with Aunt Bea and Bill bring the details of Anne’s life into sharp focus They also bring tension to the play. It is hard for the audience to tell whether the scenes are real or in Anne’s imagination.

The staging is minimal and gives the audience a clue as to what is real and what is not. Three walls are set at the back of the stage. They are covered in a black lacework design over a white background. The wall hides three openings. One is a traditional door with a doorknob. The other two openings are sliding doors without doorknobs. The director has used these doors to differentiate between reality and Anne’s imaginings.

The play pits Anne’s struggle to deal with the painful loss of those she loves and needs with the struggle of the young psychiatrist to find a way to heal Anne. Eventually Anne comes to terms with her terrible secret. The play ends with a healed Anne reading a selection from her novel to the audience.

Karen Golden was outstanding as Aunt Bea and Paula the German psychiatrist.