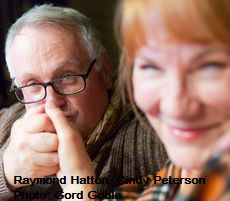 All the actors projected well, especially McDermott. However, I felt that Hatton needed to increase his volume. I was in the fourth row and I hardly could pick up on his lines, especially the punch lines. Peterson and Strom did a fantastic job. Such talent for comedy.

The set design by Dave Carroll fit the ambience, and the costumes by Susan de Pencier were truly out of the 60s. Music of the 60s was just as it was, thanks to the oldtimers Ryan Elliott, Gordon Mantle and Director Marko Hohlbein who probably were teenagers then.

White Rock Players has been an institution as being the oldest community theatre in the Lower Mainland.(est. 1944). They've produced excellent shows, and now, with Ryan Mooney as Artistic Director, the plays and actors are into the professional stream. This is the last play of the season, and Hohlbein before the show started, announced the four plays in the 2014/15 season: "Noises Off", "Babes in the Woods", "The Drowsy Chaperone", and "Quartet".