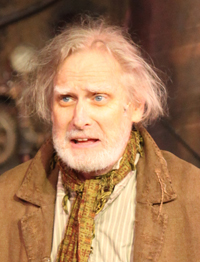 Bard on the Beach
The Comedy of Errors by William Shakespeare

Imagine an alternate world, a Sleepy Hollow, where you can wake up in the morning and find no one recognizes you, or alternatively, a foreign country where everyone behaves as if they have known you forever - or even, a country mysteriously engaged in hostile relations with your own so that your life is in peril. Such is the Shakespearean fantasy world of Comedy of Errors currently expressed by Scott Bellis steam punk, mechanics-gone-wild production at Bard on the Beach. It is a world brought to life at the push of a button - literally, by a fantastical Dr. Pinch (Jeff Gladstone) - and invoked by Tara Cheyenne Friedenbergs mesmerising choreography.

Bellis has picked up Shakespeare’s structural precision, his control of the dramatic unities, and his hyperbolic take on famous set pieces, the two sets of twins rather than the usual pair, a recognition scene involving not just parent and child but an entire family plus servants.  Pam Johnson’s set is full of cog wheels and machine parts and a wonderfully mad clock.  Mara Gottler’s extravagantly imaginative costumes range from mad scientist to winged dominatrix (Lili Beaudoin), Victorian lace to cyborg leather, gas masks and goggles.  Inventive lighting by Gerald King and a mechanistic, mysterious sound design by Malcolm Dow complete this 19th century fantasy on an old theme.

Sereana Malani is a spirited Adriana. She is not alone in being rather loud and flat in delivery, but when she is chastised by the Abbess (Anna Galvin) she comes closest to expressing real emotion and self-awareness. Lindsey Angell is a sweetly kind Luciana. Andrew Cowndens Goldsmith is the perhaps the most grounded character, stolid amidst the confusions of the day.

The sturdy figure of Nell the kitchen maid, who is given no on-stage presence by Shakespeare, is given an abundant existence by Andrew McNee in a tour de force of character acting. Several other characters/things not given a stage presence by Shakespeare also appear in McNees scenes, one suspiciously like an alternate twin of AudreyII (Little Shop of Horrors) and an extremely lively lobster/thing in the soup pot. Not to worry. It was very funny. Shakespeares shortest play can take a little padding. There are plenty of other pop cultural references to add yet more fun. If some of these go over your head, concentrate on Shakespeare's own irreverences.

Containing the riot and mayhem of the play is Scott Bellis as Egeon, the father of the Antipholi, quiet and, weary in the opening scene and resigned at the end. Yet his damaged air does not lift the play past being merely a fast-paced entertainment. Academically sound and full of foolishness though it may be, this is hardly one of Shakespeares best plays, but he never writes without observing human nature and never without heart, and it is those which are missing.