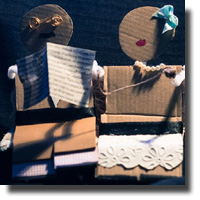 Quimera delivered this classic absurdist play of pioneer absurdist dramatist Ionesco the way it was originally meant to be presented with all its absurdity and silliness. Director Matthew Willis took it one step further and added a contemporary touch to it: rapport with the audience.

Meant to have a fourth wall as traditional theatre would have it, Willis breaks this wall as the actors go down and intermingle with the audience. In fact, from the very beginning, Mary the Maid (Natasha Zacker) acts as usherette who introduces herself as the audience comes in, and tells them where to sit. She said she liked my hat and asked me if the music being played was "retro" and I said no, it's classical music, and we went on talking about various topics including her secrets. She did the same to other audience members who started filing in, taking their seats as she conversed with them.

The other difference was the ending. In the traditional way, the conversation starts all over again as the lights fade out and the play ends. In this interpretation, however, the lights don't fade out but rather the houselights come up and if it were not for the Fire Chief (Luke Johnson) telling us to leave because the play was over, we wouldn't have known what to do.

I think French-Romanian playwright Eugene Ionesco would have enjoyed this interpretation, as did around half of the audience of around 40 who laughed loud, while the other half, including myself, were conservatively amused. The idea for the play came to Ionesco while he was trying to learn English with the Assimil method. He originally wrote the play in his native Romanian, then wrote it again in French and the English version used in this production was that of Donald M. Allen. The current title was set only after a verbal slip-up made by one of the actors during the rehearsals.