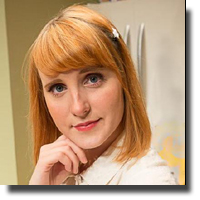 So what constitutes a “bad” Jew? Despite the myths that surround Jewish dogma, it’s probably not just a Jewish person who eats pork, or even a sexually promiscuous Jewish girl. In fact, the parameters that determine whether a Jew is good or bad are generally the same as for gentiles.

In Joshua Harmon’s single act, four-handed black comedy, Liam (Alex Rose) and Daphna (Goldie Hoffman) are first cousins in an established Jewish family. They’re extremely belligerent to each other – and not especially agreeable to other people either.

Set in a Manhattan studio apartment that seems far too small for the three people currently occupying it, the play starts temperately enough to the opening strains of "I Gotta Feeling" by the Black Eyed Peas. We first meet Daphna and Jonah (Amitai Marmorstein) a couple of days following the funeral of their beloved grandfather "Poppy," a Holocaust survivor. Jonah is a pretty easy-going type, unlike his cousin Daphna, a loquacious young woman, described by her cousin Liam (later in the show) as an Über Jew.

The quieter Jonah, just about manages to tolerate is visiting cousin’s incessantly garrulous intrusions, who offers frequent gratuitous opinions on his lifestyle. Daphna feels entitled to proffer criticism to anyone within earshot, but is obliquely defensive when it comes her way. The real fun starts when Liam arrives with his girlfriend Melody (Kayla Dunbar), a pretty, blue-eyed blonde gentile.

Daphna's relationship with Liam has always been more volatile than her relationship with the nebbish, man-in-the-middle Jonah, who can be more easily manipulated. Liam initially refuses to stay at the apartment when he discovers that Daphna is staying there. The situation goes from unfriendly to hostile when Daphna and Liam begin heaping vitriol on each other over a gold Chai (Hebrew word meaning Life) that their grandfather has handed down.

Goldie Hoffman is stellar as the feisty Daphna, although in some of the earlier scenes with Marmorstein, she was speaking too fast and too quiet to be heard distinctly at the back of the theatre. She displayed a combative acting style reminiscent of Julia Louis-Dreyfus in the Seinfeld television series. Alex Rose takes everything that Hoffman’s character throws at him and gives it right back. His Liam is likely the most complex character of the four.

Kayla Dunbar gives a sympathetic portrayal of the outsider, Melody and actually delivers an okay rendition of "Summertime" from Gershwin’s Porgy and Bess. Amitai Marmorstein has considerably fewer lines than the other actors, but still manages to get his share of the laughs and even steal a few scenes.

Director Jay Brazeau, with help from assistant director Yasmin Abidi, keeps the energy flowing at a frenetic pace throughout the show’s ninety-plus minutes. Adam Timmon’s set and Ryan Lee’s lighting combine inconspicuously to bring a touch of quality to the production.