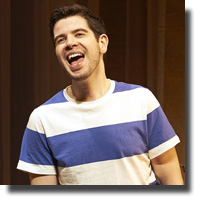 Touchstone Theatre and the Arts Club Theatre Company
The Way Back To Thursday Book, Music, and Lyrics by Rob Kempson

This Theatre Passe Muraille production is a two-handed, "through-sung" musical. It is currently (June 18 – 21) being presented as part of In Tune, a Vancouver-based biennial event that showcases new Canadian musicals, and supports the artists who create and perform them.

The Way Back to Thursday relies on a collection of well crafted songs to drive the storyline’s narrative. It’s a coming-of-age story – or perhaps more accurately, a journey of self discovery that has at its centre a young man’s revelation of his sexuality and his loving relationship with his maternal grandmother.

It marks Rob Kempson’s debut as a playwright, and he stars as Cameron, a man who looks back profoundly at the Thursday night movies he shared with his “Grandma.”

The creator’s lyrical songs navigate us through his life starting as a babe in a bassinette, to a rambunctious eight-year-old, through to a sexually confused teenager conflicted over Rock Hudson’s lifestyle (yes, closeted gay Hollywood icon Rock Hudson), and finally an adult who comes to realize that he is not the only one effected by time and change.

Kempson is stellar as Cameron, showing that he has the versatility to portray the range of age and personality of his character and deliver the songs with a balance of humour and poignancy. Valerie Hawkins as the grandmother must also show versatility as she declines from a vibrant widow to an effete old lady. She carries most of the sentimental songs and while not possessing the vocal chops of her co-star, handles them well. It was difficult to ignore that there barely seemed one generation between the two, let alone two.

The show’s songs are underscored by capable on-stage musicians, Chris Tsujiuchi at the piano and Samuel Bisson on cello. Straight forward direction by Briana Brown lets the chemistry between the two performers to convey the simple storyline.

Despite delving into melancholia towards the end, The Way Back to Thursday offers excellent entertainment.