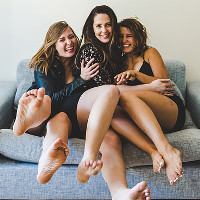 Bachelorette is a wild, hilarious, and bawdy ride. Taking place the night before Becky’s wedding, her “friends” drink, snort coke, hookup, and trash the bride.

The actors are well cast, have good chemistry, and great comic timing. They worked hard and were focused and energized despite being perhaps disappointed by the size of the house.

While their characters are generally irredeemable, the performers made me feel compassion for their humanity. This production deserves a large audience and successful run. While there wasn’t a huge audience the night I attended, the audience was very responsive and everyone seemed to enjoy the show very much. I definitely did. Perhaps tickets are a little more at $25 than its target audience can afford..

While Bachelorette is primarily a comedy, there are some very dramatic and dark moments. Much like life, not everything is resolved at the end and we are left wondering at what will happen to the relationships and lives of the characters of the play.

Leslye Headland also made this play into the 2012 movie of the same name starring Kirsten Dunst, Isla Fisher, Lizzy Caplan, and Rebel Wilson. Headland wrote a cycle of “Seven Deadly Sins” plays and Bachelorette is one of them.

It’s refreshing to see a play about the lives of people in their twenties and I applaud Ben Bilodeau Productions for giving Vancouver audiences this very funny play. Bilodeau Productions is a welcome and needed addition to Vancouver’s theatre community. I highly recommend Bachelorette for a hilarious and fun night out.