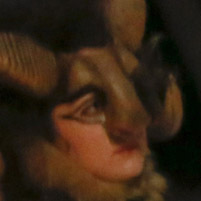 The Bacchae 2.1 by Euripides, adapted by Charles Mee

'Version 2.1' suggests a complete re-working of what came before, even to the extent of being incompatible with the original. Charles Mee's revision of The Bacchae maintains the structure and cast of characters of Euripides' 2500 year old drama as well as some of its ferocity and ambiguity. The time though is the present. Pentheus (Matt Kennedy) wears a suit and is constantly accompanied by two aides (the surprisingly violent, astonishingly lyrical Francis Dowlatabadi and Javier Sotres). The place is not ancient Thebes or Mount Cithaeron but New Orleans. Airy white slatted structures and blocks suggest open spaces, verandas, sun. Later, with the help of excellent lighting by Eric Chad, they create a dream world where Dionysus' followers perform his rites.

Issues of sex and gender, violence and male fantasy overtake the place of religion and the Dionysian world as themes of the play. The text constantly slides between the rational and the fantastic and between lyricism and vulgar crudeness.

The action of the play opens with Dionysus, a richly-cloaked figure, whirling slowly like a Dervish. He is joined gradually by the Bacchae, his women followers, mysteriously veiled. The spell is broken by Tiresias, the old, blind man who has come to pick up his friend Kadmos (Nathan Cottell), aka grandfather of Pentheus, to go up to a mountain wilderness to worship Dionysus with the city's women, now they are free of the responsibilities of younger men. Following the original plot, Pentheus, guardian of law and order, soon sends his henchmen to pick up a young man who is claiming to be a god. This man (Thomas Elms), Dionysus in disguise, is brought in in chains and Pentheus begins to interrogate him about his claim to be a god. The conversation quickly gets out of hand when Dionysus questions Pentheus about his underwear. Similar diversions from the original text shoot through the play, generally overtly sexual in nature and frequently violent. Kennedy and Elms are very good here showing Pentheus both unsettled and secretly titillated and the dialogue between the two is taut.

Ultimately Pentheus' plan to send an armed force to capture the wild women is subverted by Dionysus, who persuades him to disguise himself as a woman, to spy on their rites. On the mountain, the ruse is discovered by his own mother, Agave (Helena Fisher-Welsh) who kills him, madly thinking him to be a wild beast. Kadmos brings her to her senses and comforts her. Here again Mee departs from the original as his Kadmos takes refuge in hoping against hope that it was all a dream. Euripides' Kadmos faced his fate straight on. The play ends as it began with Dionysus as a god, slowly revolving like a Dervish.

Thomas Elms played Dionysus as a happy hippy type with a Christ-like gentle composure. Duly distant though he was, he lacked the dispassionate cruelty of Euripides' god. Matt Kennedy's transformation of Pentheus from tough leader to simpering soubrette was subtle and thorough. Director Dennis Gupa chose to dress Pentheus as a drag queen rather than, say, simply let him 'pass' as a woman, or would-be maenad, a choice Kennedy embraced.

In a helpful bit of gender-blind casting, Tiresias, well-known to Euripides' audiences as a man who had been transformed into a woman for seven years, was played by Allyce Kranabetter. Also cross-cast is Demi Pedersen as one of the unsuccessful force sent to retrieve the women from the mountain, but here the gender-bending was confusing.

In the second half of the play, set in the wilderness, the maenad women are as sexually explicit in describing their fantasies as the men were earlier. Where the Greek chorus spoke with one voice, Mee has given them individual identities. Particularly notable were Ghazal Azarbad as the Orange Woman and Jenna Mairs as the Lavender Woman.

In place of the sung choral interludes of a Greek play, Mee has interspersed numerous places for music, dance and song. Mostly performed on stage by the multi-talented Demi Pedersen on a variety of instruments, the music, drawn by sound designer Kate de Lorme from both Eastern and Western traditions, evoked worlds where, as in ancient Greece, religious ritual, art and everyday life are inseparable. The choreography and Kiara Lawson's costumes too capture ritual, pain and other-worldliness.

This is a complicated play and if in the end it lacks the menace and mysterious aura of the original, it offers modern terrors, and considerable room for thought.