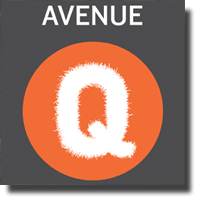 Avenue Q is wonderful family entertainment – just so long as no one in your family is younger than sixteen nor older than eighty. The charming cast of puppets are as colourful as the language they use and with themes like underemployment, racism, homelessness and sexual preferences; the show is hardly suitable for regular MuppetTM fans.

This Arts Club Theatre production is a musical satire that focuses attention on the realities many young people face when they enter the ‘real world’ and suddenly realize they’re not quite so “special” as parents, teachers and children’s television have led them to believe.

Through the misadventures of Princeton, who like the other denizens of a run-down New York City borough is equipped with only a head, torso and arms, we see how a bunch of ‘twenty-somethings’ face up to issues like economic uncertainty, a depressing job market, student debt, and a general lack of purpose.

Among the four (always) visible puppeteers, Kayla Dunbar brings to life both Kate Monster and Lucy. She provides unique voices for both while subtly switching from character to character. After a short time, the puppeteers become much less noticeable.

In addition to the nine hand-made characters that require manipulation, there are three cast members who are able to speak and move on their own. Shannon Chan-Kent sparkles as winsome Asian-American Christmas Eve who speaks with comical fractured English. Her rendition of “The More you Ruv Someone” is priceless. Busy local actor Andy Toth has less to do as Eve’s fiancé Brian, an unemployed wannabe comedian. Evangelia Kambites alas, has to dumb down a fair bit for the role of ‘building super’ Gary Coleman.

Kambites’ character is an inchoate parody of Gary Coleman the actor who played Arnold Jackson in the eighties sitcom Diff’rent Strokes. Coleman’s story is a show business tragedy. After being beset with health and legal problems, he died of a brain haemorrhage aged 42. When the show was originally developed Coleman was alive and frequently fodder for the tabloid press. Perhaps it’s time for the show’s creators to lay the character to rest.

Marshall McMahen’s handsome set of a fictitious city block (complete with fire hydrant and manhole cover) is functional and spatially economic. It also offers a mid stage entrance point for the many comings-and-goings.

Just prior to the show, there was a light-hearted multi-media announcement for the Arts Club Theatre Company’s upcoming 50th season.