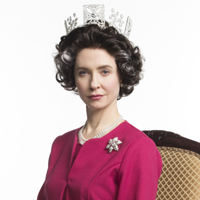 One of Queen Elizabeth’s many duties is to conduct weekly meetings with the British Prime Minister. Not counting incumbent Theresa May, she has seen twelve Prime Ministers come and go and has held those routine confabulations with that diverse dozen starting with the imperious warrior Winston Churchill up to the recently departed resident of number 10, Downing Street, David Cameron.

The conversations are generally informal and may involve both political and personal discussions. Since no minutes are taken and anything said is all in strict confidence, it’s unlikely that playwright Peter Morgan knows any more than the rest of us about what went on. Therefore the dialogue between Her Majesty and a first minister expressed in The Audience is purely conjectural.

Mr. Morgan chooses just eight past Prime Ministers, deciding to ignore: Harold Macmillan, Alec Douglas-Home, Edward Heath and James Callaghan. Seven actors play the eight PMs with rather varying degrees of success. Joel Wirkkunen does a spot-on take of Winston Churchill as he pompously “instructs” the new sovereign. Erin Ormond is plausible as the Iron Lady. Jay Hindle plays both Tony Blair and David Cameron without displaying any discernible difference between the two. David Marr offers us a far too complex characterization of Harold Wilson. The problem here is more likely Morgan's overzealous dramatic licence. Wilson, an Oxford don, may have emphasized his blue-collar roots, but was too smart to be so boorish.

Morgan’s play makes no attempt (perhaps wisely) at chronological order. The first statesman we see in conference with Elizabeth (Anna Galvin) is John Major (Ted Cole) who was PM in the early to mid nineties. To say that Britons saw Major in monochrome might be too complimentary – he was a single shade of grey. The play then zigzags back and forth over six decades with occasion glimpses of the Queen’s perceived isolation as she chats with her younger self (Bianca Sanchez Galvin, Anna Galvin's real-life daughter).

Anna Galvin manages to closely mimic the Queen’s cultured treble voice and the shuttling between decades gives her the opportunity to demonstrate nuances of the queen at different ages. Galvin gives her character some attractive personality traits she may not actually possess. She comes across as down-to-earth, or at least as much like down-to-earth as her upbringing allows.

Despite the non-linear format, director Sarah Rodgers does an excellent job with the show’s pacing. But alas, she follows the playwright’s maxim of avoiding conflict. Only in the scene with a typically strident Margaret Thatcher who takes issue with the palace’s dislike of her policies, do we witness confrontation. Ironically, the antipathy that was often played up in the British media benefited both these women. One might assume that because the queen is wealthy she would naturally tend towards the Conservative party, but in seeming to be at odds with Mrs. Thatcher, she could be seen to be fighting for the working class. On the other hand, Thatcher’s tough persona was further enhanced.

The Arts Club Theatre Company certainly appeared to have blown the budget on Christine Reimer’s costumes. The queen’s multiple costume changes range from the extravagantly stunning coronation gown to the frumpish corgi walking attire with several elegant changes in between.

Peter Morgan’s The Audience takes real life people and actual historical events and places them in fictional accounts. The play is entertaining, performances are solid and production quality is excellent. It’s worthwhile seeing, but don’t expect a history lesson.