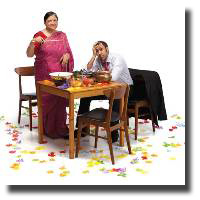 A Brimful of Asha is an evening full of laughs. Living up to the PuSh Festival’s reputation for innovative theatre, this charming visit with a mom and son moves away from stage acting to a fresh, informal recounting of the shenanigans in the Jain family as they try to marry off their son following Indian tradition.

Following the best of Canadian tradition, Ravi resists their attempts to rush him into a marriage until his career is set, and he has fallen in love with a woman of his own choosing Ravi and his mother, Asha, regale us with the details of the venture - Ravi with the general narrative, and Asha with hilarious interjections, comments, and occasional motherly corrections.

Their versions highlight the stark differences between Indian and Canadian cultures when it comes to courtship and marriage. The dialogue is oftencomically turbulent, but always, the love shines through. The evening is a delight - informal, very friendly and familiar - and we are in stitches the whole time.

The performance is so masterfully treated that it feels as though nothing was written or rehearsed. What a testament to the talent of these creators and performers! The younger Jain is an award-winning actor, director, producer, and arts activist, so no surprise there.

His mother has navigated the treacherous cultural contradictions between watchful, tally-keeping Indian traditions and her individualistic, at times rebellious Canadian son, and has survived with her sense of humour and the obviously deep love and devotion of Ravi intact. No small feat there, as you’ll see if you take my advice and put this on your must-see list.