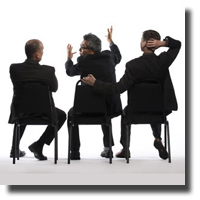 When bourgeois poser Serge (Hiro Kanagawa) splashes the cash on a painting by a semi-well known artist, he couldn’t have imagined it would be the catalyst of a confrontation between himself and his old chum. Marc (Michael Kopsa) sees nothing more in the painting than meets the eye and is furious with Serge for paying a couple of hundred francs for “white stripes on a white background.”

Marc then seeks support for his opinion from their mutual friend Yvan (Haig Sutherland). However, to his chagrin, Yvan is as non-committal as a Swiss diplomat. When the three men get together later for a social evening, the conversation becomes a battle zone as the trio reveal long hidden resentments.

Of the company, Haig Sutherland is the most entertaining as the mildly neurotic Yvan. His mind-mangling jeremiad over the composition of wedding invitations brought both guffaws and applause from the audience. Michael Kopsa gives a typically droll performance as the hubristic Marc, while Hiro Kanagawa is utterly convincing as nouveau riche Serge.

Director Stephen Drover maintains a perfect pace throughout. The play employs a technique (a gimmick, really) that has the characters making their private thoughts audible to the audience. The device provides much of the play’s satire and removes the invisible barrier between the performer and the audience.

Perhaps it’s just simply schadenfreude, but there is something oddly cathartic in watching normally rational and educated of people dismantle right in front of you. No one conjures this better than Yasmina Reza.