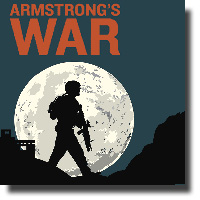 But wait. Armstrong's War is not the downer we might expect from a brief synopsis. In fact, there’s lots of humour that goes along with the deep-seated emotion conveyed by two stimulating characters. Twenty-one-year-old Canadian soldier Michael (Mik Byskov) and twelve-year-old (girl guide) pathfinder Halley (Matreya Scarrwener) share their last name with a famous astronaut and an infamous cyclist as well as with each other (though unrelated). They are brought together when the soldier is wounded in active duty and is being rehabilitated in a recovery hospital. Halley, who is wheelchair bound, is hoping to earn her Community Service badge by visiting the hospital every week and reading to the injured soldier.

But Corporal Armstrong is no mood to be cheered-up by a dogmatic pre-teen who has learned to speak for ten minutes without taking a breath. Nevertheless, over the course of six weeks, they come to realise that they have more in common than either of them realised. When they choose to read Stephen Crane’s bestselling novel The Red Badge of Courage they inspire each other to expose their own battle-scars.

Matreya Scarrwener, who touches everyone’s hearts as the precocious and persistent Halley, serves up nearly all the lighter moments. Only a few years older than her character, she is more than just capable of delivering the nuances of a typical naive schoolgirl. Mik Byskov is pretty intense as a soldier suffering from more than just his visible injuries. While one must ponder on how such a young serviceman has already achieved the rank of corporal, the physicality he brings to the role is certainly affecting.

Mindy Parfitt deserves praise for her steady directorial hand in squeezing a six week process into an hour-and-a-half narrative without any yardstick. Naomi Sider’s set of a hospital room with light-green painted walls and basic furnishings is evocative of a place we would all rather leave than enter.

Armstrong's War is both a coming of age story and a story of survival. It may still be a work in progress; if not in the writing, perhaps in its future presentations.