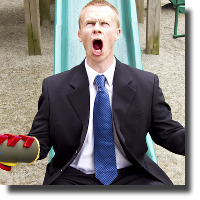 Armed, a new Fringe-length play by local playwrights Andrea Loewen and Dani Bryant, is a ludicrous little piece of théâtre de l'absurde.Three actors take on eleven roles, one of them, Darren Boquist, only has responsibility for playing the protagonist known simply as Joe, leaving the remaining ten roles divided equally between Ky Scott and Munish Sharma.

Soaked in satire, the story (such as it is), follows the misadventures of Joe, a regular everyman who goes to extremes to overcome his perceived paucity in manhood by a misguided expression of machismo.

Joe has a job and a girlfriend. Sadly though, he is about to lose both. When Joe’s girlfriend Anna (Ky Scott) gets the promotion that he was hoping for, her first undertaking is to fire him. But wait! There’s worse to come. He consults a doctor (Munish Sharma) who convinces him that he is suffering from acutely diminished cullions. Desperate to recapture his manhood by just about any means available, he enlists in the military, but fails the physical; he acquires a tattoo, but not one with a snake curled around a blade – one that depicts ‘my little pony.’ Climactically, he settles on the idea of a “canon-arm” appended to his own right arm starting at the elbow.

Darren Boquist turns in a madcap, over-the-top performance as the hapless ‘hero.’ Ky Scott and Munish Sharma showed enough versatility to overcome the lack of costume change. Particularly Scott, who portrays Joe’s girlfriend, as well his mother, a flaky scientist and a flippant tattoo parlour receptionist.

The set is about as basic as you can get, a black box and a folding table. Nonetheless, young director Francine Dulong makes the most of what she has to work with and actually makes the minimalism work in her favour. Actors having to mime using an elevator, frantically hitting the “close-door” button provided the play with some of its lighter humour.

There was perhaps a certain irony that the carnage that took place in Denver, Colorado occurred during the show’s run. In that context, Armed might be seen as a cautionary tale. Real manhood doesn’t come about as an expression of strength and power through weapons, but from a man’s heart and soul.