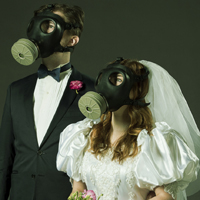 Apocalypse is a Greek word, which almost literally translated simply means revelation. However, in the prophetic context, it has come to adumbrate an ‘end of days’ scenario.

Do you have what it takes to survive an impending end of days? Jen and Tim believe that they should at least try. Going out and spending good money on crates of bottled water and fire-retardant coveralls, as well as stocking up on canning jars of stewed fruit.

Jen is an editor of a cultural hard copy magazine that's in a financial hole to the tune a hundred grand. Tim is an unemployed video game developer who spends most of his waking hours dressed the same as in his sleeping hours. He would seem to prefer his virtual life over one based in reality.

Jen at least tolerates Tim’s obvious failings. That is, until Bruce, a consummate survivalist turns up. Bruce is brought in to save the magazine by changing its direction and focus. He tries to convince Jen that the magazine’s future success is as a self-help guide to preparing for the inevitable apocalypse and challenges Jen to take up urban survival training.

Jen and Tim arrange a dinner party and invite Bruce and Abby, Jen’s best friend from her university days. The dinner is intended to demonstrate how well prepared they are, but the mushroom casserole doesn’t go down well. The programme further falters when the foursome takes their preparedness training on a weekend camping exercise.

Claire Hesselgrave has the most to do and is pretty convincing as self-starter Jen. However, sometimes she works a little too hard and is guilty of overplaying the role. Sebastien Archibald as Jen’s hapless husband is an excellent foil in the first act, but the pace of the play seems to overtake him in the later scenes.

Zahf Paroo arguably has the most complex role as Bruce, who knows what he wants and what everyone else wants. He manages the role well, though, for me, he overdoes the machismo. Lindsey Angell is stellar as the deferential Abby. In the date scene with Zahf Paroo she displays a natural comic talent.

David Roberts had to overcome the problem of integrating the outdoor backdrop of bare trees casting faux shadows on an inside set of Jen’s apartment at stage right and the magazine’s office at stage left. The oft used door to the apartment looked awkward set into the ‘campestral’ rear wall.

It’s always good to be among the first to see a new Canadian play, and Jordan Hall’s dark comedy is a lot of fun. The play might have been more aptly titled How to Survive a Minor Inconvenience. Which I’m sure, that just like the play’s characters, most of us would struggle to get through.