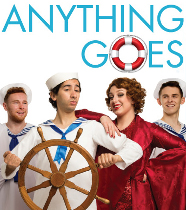 What a delightful show! As one of the songs in this musical goes, "it's de-lovely, it's de-lightful...". Madeleine Suddaby (Reno Sweeney) was fabulous. That strong and vibrant singing voice of hers reminded me of the legendary Ethel Merman who played this role in the original 1934 Broadway hit. The surprise stand-out was Michael Wild (Lord Evelyn Oakleigh) who got a lot of laughs for his comedic antics, and a wild applause during curtain call.

This musical is dear to me because I played the Captain years ago when I was doing Graduate work in the United States. And I still remember those scenes, especially the wedding scene at the end. It was a trip along memory lane.

RCMT has produced quality musicals these past 28 years, and we've reviewed a lot of them these past years. Kudos to Artistic Director and choreographer Valerie Easton for a wonderful show. Accolades to all the other actors, especially Andrew Cownden (Moonface Martin), Shannon Hanbury (Hope Harcourt), Laura Ross (Erma), and Daniel James White (Billy Crocker) for their superb and brilliant performance.

The live orchestra under James Bryson was excellent in its timing and precision as it accompanied the singing and dancing. The tap dancing as well as the ballroom dancing with rumba, waltz and tango were entertaining, and the opening night audience loved every minute of it.

The set designed by Omanie Elias, which takes place aboard the ocean liner S S American, was nicely constructed. The only problem were the sight lines. I was sitting on the left aisle and I couldn't totally see the action taking place on the right side of the stage, especially during the jail scene. But other than that, the set changes and the lighting were close to perfect.

Most of the classic songs ("I Get A Kick Out Of You", "You're The Top", "Easy To Love", "It's De-Lovely", and "Anything Goes") came up in the first half which lasted an hour and a half. After a 15-minute intermission, the second half was fast, and lasted only 30 minutes. We were out of the theatre by ten.

This is a must-see show. You'll surely be de-lighted!