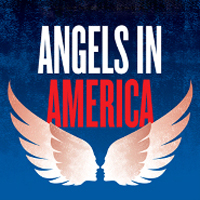 I realized my elevated expectations when I decided to attend this performance with a colleague who had never heard of the play before (I let out an involuntary gasp when she revealed this!). My eagerness to rekindle my own affections for this play, as well as a deep hopefulness not to disappoint her “first experience” of what I’d already raved to her was one of my favourite plays of all time, had me nervous with anticipation.

At an impressive 3 hours and 10 minutes (and that’s just part one), Tony Kushner’s Angels in America is an emotional and thought-provoking study of the political and social climate of the 1980s, with particular emphasis on the AIDS crisis. There is no shortage of compelling diatribes or heart-wrenchingly emotional scenes. And I was pleased to see all players in this production rise to Kushner’s challenge.

Brian Markinson is brilliantly cast as powerful corporate lawyer Roy Cohn, and channels a gruff Al Pacino-like South Bronx accent while effortlessly delivering each robust performance, I’m sure true to the real Roy Cohn upon whom the character was based. One of my favourite speeches is the scene where Cohn is dressing in his doctor’s office, and here Markinson as Cohn proceeds to dismantle any of his doctor’s insinuations that he is a homosexual, since as he puts it, homosexuals have no “clout”. Markinson carries this memorable interchange unfalteringly, and with his own share of clout.

Playing the rejected-lover-turned-unwilling-prophet Prior Walter is the very lovable Damien Atkins. Atkins shares heart and gumption in his portrayal of Prior, who is dying of AIDS. But I had a hard time detecting any chemistry between he and long term partner Louis (played by Ryan Beil). Indeed, I witnessed a lot more affection in the men’s bathroom between Beil and Craig Erickson (playing the part of young Mormon lawyer Joe Pitt). Beil and Erickson’s easy back and forth banter is reminiscent of a true attraction-at-first-sight encounter, with more charm and chemistry than any of the other domestic scenes between Beil and Atkins. A shame, since the love between these two characters is all the more poignant in the light of Louis’s later transgressions.

Louis Ironnson (an over-sensitive, self-deprecating gay Jewish man, and a seemingly fairweather lover to Prior) is played by the very talented Ryan Beil, who makes Louis a more sympathetic character than I’ve ever seen performed in this play before. Whether waxing political and philosophical in a guilt-ridden tirade, or discharging historical facts in a simultaneously self-important and self-loathing way, Louis’s character certainly gives Beil a mouthful of complexity, which he levers with just the right amount of self-deprecation and intellectual bravado. Beil actually reminds me of a young Jon Lovitz, which makes him that much more endearing (until you consider all the less than ethical things his character has done).

Struggling with his faith and sexuality, Joe Pitt is a young Mormon up-and-coming lawyer, taken under the wing of the more dominant and persuasive Cohn. Joe is played by the very talented Craig Erickson, who makes a husband’s tormented anguish over a secret life absolutely palpable. And on stage, Erickson’s voice projects even when his back is turned. But Pitt’s wife, Harper, the sweet albeit naïve stay-at-home wife who pops too many pills (played by the amazing Celine Stubel) really shone in this husband and wife dynamic. Stubel has the greatest sort of sleepy, valium-fueled voice mannerisms with a certain sly knowingness to it. And she’s not totally out to lunch – she knows her husband is hiding a secret, shrugging at one point “now we both have a secret.”

You might say that Harper and Prior are the victims to their more selfish and guilt-ridden partners, Joe and Louis respectively. And Atkins and Stubel really convey that sort of sad, forsaken lovability well. In overlapping scenes where Louis is leaving Prior and Joe is admitting he will never be who Harper needs him to be, it’s clear that Harper and Prior share more than just victimhood – they almost share a sort of bond, an ethereal connection. “The Threshold of Revelation” if you will. They belong in a different world - a world free of pain.

But Belize, nurse slash ex-ex-drag queen, played by the incredibly charismatic Stephen Jackman-Torkoff, steals the show. Jackman-Torkoff gets all the best lines, including scolding Louis: “He’s dying. You just wish you were” – a line which is echoed later by Roy Cohn to Joe – “You’re not dead; you’re a sissy,” further illustrating the parallels between Joe and Louis’s characters in a way I’d not noticed before.

Angels In America has its unheavenly moments that can be rather difficult to watch. Explicit sexuality and particularly excruciating scenes were handled tastefully and with sensitivity, and I was taken by the bravery and poignancy of each one. Actors playing multiple roles disappeared into each character; notably, the “prior priors” (Prior 1 and Prior 2), who jump into the scene (and into Prior’s bed) with whimsy and humour, a highlight of the performance. Heavy hitters Markinson and Erickson transition seamlessly into the olden Priors and back again effortlessly.

Director Kim Collier has made a few subtle departures from the HBO miniseries, which many of us know well, and she has made this production her own. A few modern touches, such as camcorders and projections used in scenes dealing with hallucinations, highlighted the ethereal nature of these moments, and was a nice touch. The stage set-up by Ken MacKenzie was sparse but effective with huge stone pillars set against a backdrop of city-hall-like steps. These pillars loom towards the audience like a portend of things to come, or perhaps a simple homage to the Greek Tragedy, from which this story borrows its “deep, mythic dimension” (as Collier notes herself in the Director’s Notes). Though sparse, it hid stage props nicely – a bed slid out from behind the stairs for bedroom scenes, a large wooden lawyer’s desk rose from beneath the floor.

Do try to make it to this performance of Kushner’s Angels In America – and then see Part Two in September 2017. It’s a theatrical masterpiece, which if you’ve never seen before, here would be a good place to start. And after all, “it's the fear that comes after the doing that makes the doing hard to do... but we can almost always live with the consequences.” Maybe not super relevant, or maybe it is; either way, Arts Club Theatre will not have a hard time selling out this show.