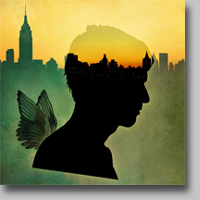 Set during the Reagan administration, this is the first part of the two-part series in which two independent couples’ turmoil are uncovered.After one partner reveals his recent discovery of being infected with AIDS to his boyfriend, their story delves into the panic of the disease and the fear many faced of staying together during the infancy years of this epidemic when there were incredible unknowns about its nature.

On the other hand, the heterosexual couple has a problem with the lack of intimacy in their marriage mainly because of the erratic behavior of the mentally-ill wife. The themes of fear, trust, religion, monogamy, politics and personal acceptance are deeply routed in the plot and make this drama thought-provoking throughout the three hours.

With a small stage, the sets and costumes were effective in bringing the Reagan-era to life and the futuristically dressed actors who quickly changed the sets brought a mystical feel to the overall performance. The soundtrack, which featured numerous popular hits, helped balance the dramatic content so that the overall performance wasn’t too dark. .