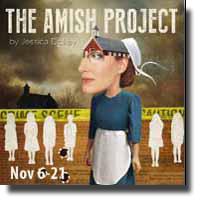 On the morning of October 2, 2006, Charles Roberts said goodbye to his family, and for reasons only speculated, he drove the short distance to West Nickel Mines; walked into a mixed age and gender Amish school room and fired his gun at ten female students, before turning the gun on himself. It didn’t take long for the mass media to invade this pastoral corner of Pennsylvania to cover the story. While the Amish people are not renowned for seeking public attention, the horrendous event thrust their community at the centre of a worldwide audience.

Jessica Dickey's solo 60-minute play at Pacific Theatre superbly performed by Susie Coodin essentially deals with the aftermath, although, she places the events in fictional setting. Even the gunman’s name switches from Roberts to Edward Stuckey.

Coodin, dressed in quintessentially Amish garb: a modest blue frock, white bonnet and apron and plain black shoes, delivers a heartfelt account about the moment preceding the shooting as well as the causatum in the hours and days following. While the clothing is typically Amish, some of the half dozen or so characters the actor portrays are “English” (Amish speak for outsider), including the shooter and his wife.

I found that naming the dead gunman (albeit fictitiously) to be an odd theatrical decision. Dickey struggles, as does the audience, to get a full sense of the trauma of the five surviving children and the strength of the bereaved.

As with one-person performances, the dialogue takes a generally conversational form. Under Evan Frayne’s direction, Coodin ably takes on the task of playing these characters with a common truthfulness. Nonetheless, time and again I found myself confounded by Coodin’s abrupt transitions from one character to another – some barely relatable to the actual story.