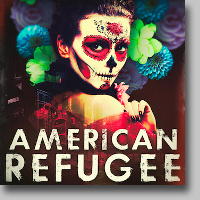 Tucked away on East 2nd Avenue in Vancouver is a tiny 40-seater theatre where Nomad Theatre Project (founded by writer/director Caity Quinn) has featured their first play entitled American Refugee. The play is a dystopic look at America, where a mysterious war rages on, an unexplained corporation - referred to by the characters as “the corp” - is in control, and a drug trade has created a seedy underbelly of corruption.

In American Refugee we meet four characters that inhabit this dark future world: Delilah (Grace Fournier), wanton burlesque dancer more than willing to exploit her sweetly innocent daughter Lulu, played very gracefully by the lovely Amy King. Max (Edwin Perez) is Delilah’s love interest as well as a ruthless drug kingpin. And finally Jake (Justin Fortier), who may or may not be Lulu’s father, is a man come back from the unknown “wars” referred to throughout the play without much detail.

An incredibly muscular Justin Fortier plays Jake, who returns home an emotional time bomb, and forms an unlikely friendship with Lulu, who dreams of being a singer in Canada, where she believes she can have a better life. Her mother Delilah has other plans, wanting to use her daughter to make money in her burlesque show.

I felt the story had a lot of promise - but wide gaps and missing details in the narrative had me confused and ultimately less invested in the outcome of the characters. It’s alluded to that Jake saw (and did) some pretty bad stuff in the “wars” without any specifics, but no explanation why the wars were going on, or against whom were they fighting. Canada seems to be a better place, but it’s not really explained how or why. The “Syntec Corporation” seems to be an antagonistic force, but it’s not really elaborated on or explained further what they are really about.

The characters also share an odd, presumably futuristic dialect of sorts (“You’re brokes?” “I feel like I’m in another worlds,” “You thinks you can judge me after you left me to die!”), but instead of feeling transported to another time, I found it a bit distracting and hard to concentrate on the dialogue itself.

This being said, a highlight for me was a scene where Amy King sings and dances under a spotlight while her mother performs a strip show on the other side of the stage. The juxtaposition was effective, and King’s graceful movements and flawless lip syncing really conveyed an intimate tenderness that was quite arresting within the context of the scene. In fact, the scenes of American Refugee that featured music and dance were by far the better scenes in the performance. The choreography was fluid and well articulated, which only demonstrates how often music and movement can tell a story even better than words.