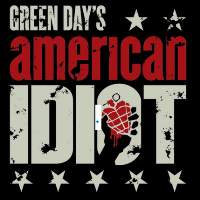 American Idiot – a punk rock opera – is based on rock band Green Day’s 2004 concept album of the same name. Inherently, it’s all to do with youth about to be mis-spent. Originally set post 9/11, the play draws parallels between contemporary American counter culture and her disenfranchised youth. In director Richard Berg’s stage version, social dysfunction and partisan anger have caught up with Billie Joe Armstrong’s visionary work. Green Day’s music, delivered with a sneer and a snarl, even more so today underscores the show’s forceful narrative.

This through-sung production has been expanded from that of the concept album and also includes songs from Green Day’s “21st Century Breakdown.” Johnny (Colin Sheen), Tunny (Nick Heffelfinger) and Will (Tanner Ford) are typical headbangers alienated by the system and even their parents. The trio look for a deeper meaning of life and plan a freedom journey to the city.

Will has knocked-up his girlfriend Heather (Erin Palm), and so reluctantly decides to become domesticated and remains at home. Tunny soon becomes disenchanted with life in the city, joins the military, gets shipped off to a war zone, is wounded in battle and returns home on a medical discharge.

Johnny finds himself alone and confused. In desperation, he turns to drugs and in the process discovers his eidolon alter-ego in St. Jimmy (Kerry O'Donovan). He manages to hook up with a girl known only as Whatsername (Ali Watson), but when Johnny refuses to give up drugs, she ends the relationship.

Following a pseudo-political multi-media pre-show, American Idiot explodes on the stage with the entire company in a hyper-kinetic version of the title song in a fusillade of light. The opening sets the scene for an hour and a half of virtually non-stop mesmerizing performance by a young talented cast. The performers throw themselves into Emily Matchette’s free form choreography with audacious abandon.

Apart from all the raw energy, the show also has poignant moments. Colin Sheen, who is excellent as the ultimately disenchanted anti-hero Johnny, sings the album’s tour de force song “Boulevard of Broken Dreams” with accompaniment from Caitriona Murphy on violin and himself on guitar. Colin Sheen, Nick Heffelfinger and Tanner Ford come together near the end of the show to provide one of the show’s highlights in performing “Wake Me Up When September Ends." The song is included on the album but seems unrelated to the central storyline.

While the three central male actors get a lot of stage time (although, Ford spends much of his time on the couch), Erin Palm, Ali Watson and Jenaya Barker (as Extraordinary Girl) are especially praiseworthy in the dominant female roles, showing strong vocal range. In arguably one of the most enjoyable scenes, Jenaya Barker leads the capable female ensemble performers in a wild, hair-tossing performance of “Favourite Son.”

Richard Berg & Robert Sundergaard’s set is essentially industrial scaffold structures in front of a neon lit backstage. The main structure supports the band, visible to the audience, on a platform above the stage floor. Gina Morel’s conspicuous clothing fits aptly between goth and grunge.

By way of an encore, the entire cast performed Green Day’s seminal high school graduation song “Good Riddance (Time of Your Life)” at the end of the show.

I attended the single preview performance. Essentially, a final dress rehearsal performed in front of an audience to iron-out any last minute glitches before opening night. If opening night is as good as the preview, it will be just fine.