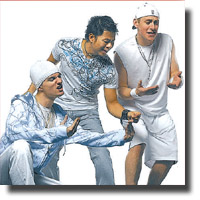 At the crossroads where funk meets faith a mind altering experience awaits all who care to call on the name of Altar Boyz. The opening night capacity crowd were standing to applaud by the end of this tricked-out, soulful, funkalicious musical parody of boy bands and all that is crazy about Christianity.

Kevin Del Aguila’s dialogue is delivered at a rapid-fire pace, as are the lyrics of the Michael Patrick Walker songs. We could scarcely finish laughing at one funny phrase before another equally hilarious punch-line was delivered. Too many to count; too many to remember. When is the last time you said you had too many laughs. If it’s been too long, you need to see this show.

Altar Boyz is touted as a “sinfully funny musical” and it was not hard to see why, what with the many tongue-in-cheek parodies of what it’s like for instance to play the church game, to have to wait before you consummate, to burn with the burden of seeing souls saved, or to cloak your cloistered Catholicism from an overly judgmental Protestant world.

If these all seem like heavy theological topics, well – they are and they’re not. You see, there is something in the story of these five altar boys gone band that lightens up your heart and makes you glad they never went rogue. Because if shining your light means lighting a lamp, then Mathew (Jeremy Crittenden), Mark (Geoff Stevens), Luke (Jak Barradell), Juan (Michael Culp), and Abraham (Brandyn Eddy) put the ‘lamp’ in lampoon.

This is not to say there are not darker moments. Juan goes through a dark night of the soul when he makes a tragic discovery. In fact, all but Abraham turn out to be betrayers, or do they?

All in all, this is a play that is brimful of excellent five-part harmonies, solos and quick turns on the dance floor. Kudos go to Sara-Jeanne Hosie for her outstanding choreography work, and to Sasha Niechoda who coordinated a capable and energetic musical team.

Sheila White also merits praise for her costume design work. I am assuming those cute little lambkin sock puppets were designed by her, too. Such is the stuff of subtle innuendo. One minor detail in a myriad of minor details that make this show a major threat. Especially with the five triple-threat performers who throw their heart and soul into this show every night.