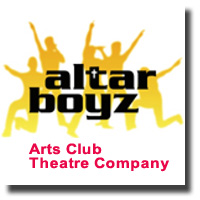 At curtain call, half of the audience stood up in ovation. I suspect they were Caholics. Perhaps only Catholics would understand the parody of this show which premiered last Friday at the Surrey Arts Centre. But it's a show for all denominations; in fact, one of the players is Jewish, Geoff Stevens who plays Abraham. It's hilarious how he goes through the rituals of confession and exorcism like a blue-blooded Catholic.

Choreographer Hosie was sitting beside me and I asked her if she had seen the show before, thinking that she had copied the choreography from the original Off-Broadway production. And she said no, that everything was from scratch. Kudos to you then and the performers for your creativity!

The songs were uproarious and touching at the same time. I enjoyed the lyrics in one song that dealt with communication with Jesus through a cell phone or a beeper. Putting in the new media for communication in this musical was clever. The audience also enjoyed Jeremy Crittenden's solo about a gay Catholic who gets beaten up by Episcopalian bullies for being a closet-case catholic. So he comes out and says he's not ashamed to be catholic. Again, a parody on gays and gay pride.

Vincent Tong (Juan) was not only comical, but an danced and sang superbly. The audience enjoyed his song "La Vida Eternal", a tongue-in-cheek version of Ricky Martin's "La Vida Loca". His Spanish accent reminded me of Wilmer Valderrama in That 70s Show. I wonder if he picked it up from this TV series.

Charles MacEachern (Luke) was funny playing dumb, and he sang his solo with gusto and vigor, bringing down the tally of sinners from the 200s to 146. At stage left, a cross with the numbers of sinners in the theatre is posted, and as the play progresses with song and dance, the numbers decrease. Finally, the leader of the gang, David Hurwitz (Mark) confesses to be the last sinner in the house and repents by being part of the gang again.

With all the bad publicity about Catholics, it's refreshing to come up with something positive and entertaining as this show does. The show will be touring all over BC after its stint in Surrey, and will eventually be shown in Vancouver.